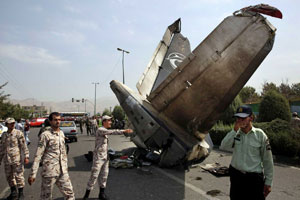 State television said 40 passengers and eight crew members were killed. The plane, operated by Sepahan Air, was heading to Tabas, a town in eastern Iran. It took off at 9:20 a.m. local time (0450 GMT) and crashed shortly afterward.

The cause of the crash remains unknown but initial reports by state-run media suggest it could be due to a technical failure.

The aircraft, an Iran-140 a 52-seat passenger plane produced in Iran with Ukrainian technology is typically used for short domestic flights.