Iran: Brutal Raid of the Special Guards, on the Political Prisoners and Prisoners of Conscience 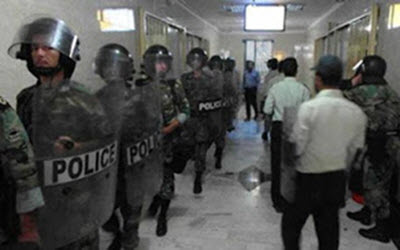 NCRI – Special Guards at the Gohardasht Prison in Karaj, on Sunday July 30, 2017, brutally attacked hall 12 located in section 4 of the prison, which is the hall of political prisoners and prisoners of conscience, and beat them.

According to reports, prisoners have been transferred to hall 10, which is equipped with CCTV cameras and a surveillance system.

Special Guards have caused great damage to the personal belongings of the prisoners following the onslaught.

Families of prisoners are worried about their loved ones’ status. Prisoners protested against the special guards during the raid and forcible displacement.

It should be noted that after the mass executions of a number of Sunni prisoners in hall 10 of Section 4, prison authorities attempted to evacuate the hall for further isolation. All the windows of Hall 10 were blocked by metal plates and were equipped with listening devices and surveillance cameras.