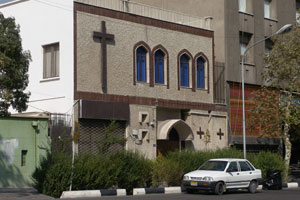 NCRI – A group of at least eight Iranian Christians were beaten and arrested last Friday in the city of Karaj while gathering for a worship ceremony in a house church.

The Iranian regime’s armed plainclothes agents raided the house church, insulted and beat the worshipers, and confiscated their books and pamphlets before transferring them to a van to be taken to a prison, according to the eyewitnesses.

The security agents also confiscated satellite dishes at the premises.

Later three of the arrestees were released on bail but there is no information available about the remaining prisoners.

The latest crackdown on the members of the religious minorities in Iran follows the destruction of a Sunni prayer hall in the capital Tehran.
In the early hours of July 29, officials from the Tehran municipality, backed by state suppressive forces (police), raided and destroyed the Sunni ‘Pounak’ prayer hall.

The destruction of this prayer hall took place while the clerical regime has prevented the large Sunni population in Tehran from using or building a mosque.

Mrs. Maryam Rajavi, president-elect of the Iranian Resistance, described the destruction of a Sunni prayer hall in the Pounak district of Tehran as an anti-Islamic, sectarian and criminal act.

“Today, the Middle East is facing a watershed moment. Moderate forces striving for human rights must be supported. And faith community leaders can contribute a great deal toward the establishment of a free Iran, where human rights are respected,” Rajavi said.