IRAN: Clashes between repressive police and people in Sardasht 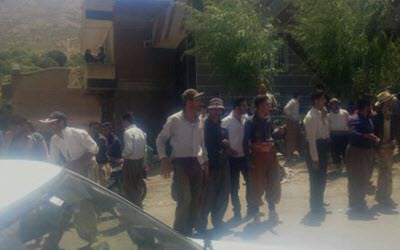 NCRI – A group of people in Sardasht, north-western Iran, attacked a police station last weekend and after several clashes with the regime’s suppressive state security forces (police), they set on fire a police car, according to reports sent from the town.

The conflict began on Saturday, July 16 when the repressive police forces attacked the tradesmen of Doupaze Bazaar located at the Gheladzi border and they confiscated the goods and properties of the sellers.

The merchants and a group of ordinary people attacked the police station to retake the goods in Sardasht. The angry protesters did not pay attention to the aerial firing by the police force.

They attacked the police station, retook the goods, and set on fire a police car.

On Wednesday, Hossein Salami, the Revolutionary Guards (IRGC) Commander in Chief, announced the formation of a headquarters for controlling prices and fighting extortion in...
Read more
Iran News Now

As the economic situation worsens in Iran due to the regime’s institutionalized corruption and mismanagement, protests by all walks of life continue across the...
Read more
Iran News Now

Iran is facing a “third wave” of coronavirus infections, according to the regime’s Health Ministry. The mullahs’ Ministry of Health has acknowledged a series...
Read more
Search