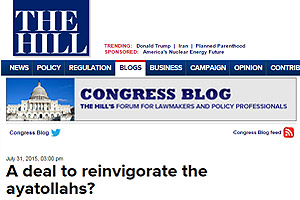 The Iranian regime’s nuclear ambition has been in existence since the late 1980’s, sometimes hindered, but steadily moving forward, writes Lord Maginnis of Drumglass.

“Methods towards attaining a nuclear weapon may have varied outwardly depending on the regime’s policy but, covertly, their resolution has remained unchanged and they have consistently driven towards creation of the world’s deadliest weapon. While the regime has been caught red-handed numerous times, their covert, underground facilities were largely discovered not by western inspections, or intelligence, but by the Iranian opposition group National Council of Resistance of Iran (NCRI) with its biggest constituent the People’s Mojahedin Organization of Iran (PMOI),” Lord Maginnis wrote on Friday in The Hill.

“Nonetheless, irrespective of Iran’s repeated distortion of reality and the fact that previous nuclear facilities were undiscovered by an inspections regime, the P5+1 signed a deal based, yet again, on good intentions. Even when ordinary Iranians didn’t know where their next meal would come from, the Iranian regime continued their costly drive towards the bomb, doubled the budget of the revolutionary guards and kept financing Bashar Assad’s murder machine in Syria. Moreover, prior to and even during negotiations, the mullahs have publicly bragged about deceiving the West and moving closer to the bomb. Knowing all this, how does P5+1 justify the placing of further trust in Tehran’s intentions?”

“Even if one could sense a change of heart regarding Iran’s 20-year aggressive push towards the bomb, the deal still doesn’t make sense. While the despotic mullahs regime was in a vulnerable economic position due to the sanctions that took years to put in place, why dismantle it based on an unfulfilled nuclear promise and while their domestic abuses and export of terrorism continue? Had the West left sanctions in place longer, recognised the ordinary Iranian people’s democratic aspirations and supported Iranian opposition groups like the NCRI, the regime would have felt a much stronger threat to its existence. In its history, we know this regime will only compromise when forced to – when they are truly in dire circumstances.”

“Now, the regime is to be rewarded with an avalanche of billions of dollars in hard cash. Even if their intentions to dismantle their nuclear programme are pure, they are still a horribly repressive regime and they are sponsoring terrorism across the Middle East and the globe, constantly working to maim and kill innocents who may challenge their influence. The West has unjustifiably emboldened this regime and, now, it has the cash to continue its campaign of terror in Syria, Iraq, Yemen, Lebanon, and at home in Iran,” the UK Peer added.

“With the Congress reviewing the ‘Iran Deal’, U.S. lawmakers must surely recognise that the Iranian regime’s victims are being left out in the cold, both figuratively and literally in the case of the millions suppressed in Iran and of displaced Syrian refugees in Jordan and elsewhere. As they weigh in their options on the deal, they should surely consider helping the victims who continue to be overlooked. This idea was the driving force behind President-elect of NCRI, Maryam Rajavi’s comments.”

“Rajavi noted that ‘the money being poured into the Iranian regime’s coffers must be placed under the strict supervision of the U.N. to ensure that it addresses the Iranian people’s urgent needs. The unpaid salaries of workers, teachers, and nurses, must be paid and food and medicine must be provided to Iranian citizens.'”

She added, “…the Iranian people have a right to know what they will get out of this agreement, upon which the mullahs’ president claimed their water, bread and livelihoods depended.”

Lord Maginnis said: “Rajavi also recognised the need for a concrete policy to immediately evict the regime from Iraq, Syria and Yemen, where it continues to fund terror and will no doubt be emboldened by an enormous injection of cash from the deal.”

“Ultimately, however, Rajavi recognises what the P5+1 has yet to accept, the time has come to hold the Iranian regime and its senior leaders accountable and to help the Iranian people to establish a free, democratic and non-nuclear Iran.”

“Whether Congress approves or rejects the Iran Deal, one hopes and would urge it to take note of Rajavi’s comments and to uphold the aspirations of the Iranian people and their Resistance movement for a democratic change in Iran,” Lord Maginnis added.

Reject Iran nuclear deal in favor of regime change from within