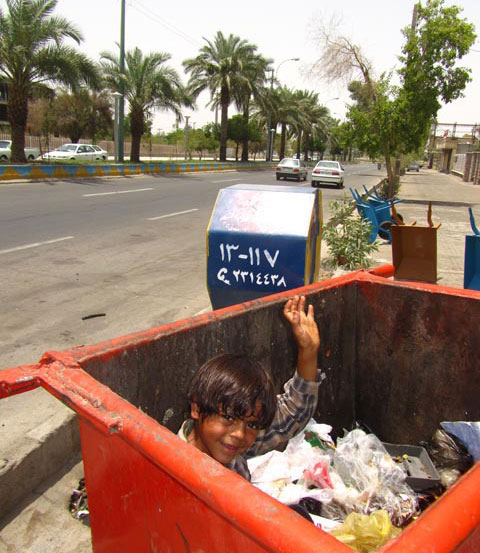 NCRI – The majority of street children in Iran are over 10 years old with an average income of 23,000 tomans, about 7 dollars, per day according to a recent study by a state organization.

Based on a study by the State Welfare Organization most of these children are engaged in routine work, in particular street vending (73.2%), porterage (6.8%) and playing music (6.4%) or semi-routine work of garbage searching and collecting bread waste (9.6%) and panhandling (5.7%).

A very small number of children (2%) are also engaged in the drug trade and pickpocketing.

Street children live in dire conditions where they survive in abandoned buildings, containers, automobiles, parks, or even on the street itself.
Street children experience a series of social and psychological traumas on the streets on a daily basis.

The quantitative data based on the study shows that 40.2% of the kids have mentioned heat and cold tolerance, 34.9% have mentioned confiscated goods, 33.2% stated being involved in a car accident and 26.7% mentioned some sort of other illness.

Among the children’s numerous experiences that have been quoted by several children’s organizations, violence from the public, peers and police officers are common occurrences in the lives of street children.

Street children in Iran, compared with the general population, have a higher alcohol and drug consumption rate under the age of 18 years. About 17.3% of street children have had alcohol at least once in their lifetime, and about 7% of street kids drink alcohol every day.

The age of starting drugs among street children is actually quite low, where about 56 per cent started using before the age of 14. Many children in this study claim that this addiction runs in the family where 43.8% have reported an addict father and 36.9% have reported close friends being addicts.

These street children come from families that do not have a desirable economic situation, where fathers are unemployed and there is a weak participation from the mothers towards the family income.

Determining the numbers of street children in Iran is a virtually impossible. In a 2005 report by the U.S. State Department, by the Iranian government’s own admission, 60,000 street children were accounted for in Iran.

Numerous child rights organizations suspect that the number is substantially higher, citing figures of 200,000 or more. Of this number, about 55 percent are the children of Afghan refugees.

The atrocities these children experience are the blatant fault of the Iranian regime and are in direct conflict with the ‘Convention of Rights of Children’ that demands that children have to be looked after by the state if their own families cannot provide for them.

However, no such step is being taken by the mullahs for the betterment of these children, where they are too busy building up nuclear weapons and exporting terrorism and fundamentalism.