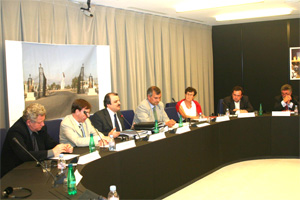 NCRI – The threats by the Iranian regime against Iraq and the Iranian Resistance were discussed in a meeting at the European Parliament in Strasbourg on May 17, 2006.

The meeting was organized by the Friends of a Free Iran, a Euro Parliamentary group, and the guest speaker was Mohammad Mohaddessin, Chair of the NCRI’s Foreign Affairs Committee.

The Joint-Chair of the group, Paulo Casaca, member of the European Parliament Socialist Group from Portugal, opened the meeting by welcoming speakers from different parliamentary groups which included, Jaroslav Zverina from Czech Republic (EPP-ED); Philip Philip Bushill-Matthews, from the British Conservative Party; Eva-Brit Svensson from Sweden, Vice-Chairwomen to Confederal Group of the European United Left – Nordic Green Left and Vice Chair to the Committee on Women’s Rights and Gender Equality; Tunne Kelam, (EPP-ED), member of the Committee on Foreign Affairs from Estonia; Bernat Joan I Mari, member of the Greens/European Free Alliance Group from Spain; Emanuel Fernandez, (PSE), member of Delegation to the ACP-EU Joint Parliamentary Assembly from Portugal and Mogens Camre, Vice-Chair of the Union for Europe of the Nations Group from Denmark.

Casaca strongly condemned Iranian regime’s meddling in Iraq and in particular its conspiracies against the Iranian Resistance as the main obstacle to the fundamentalist regime’s plans in Iraq.

Referring to mullahs’ recent letter to the Iraqi Foreign Minister requesting measures to impose restrictions on the People’s Mojahedin Organization of Iran based in that country, he said: "The regime’s request is understandable because the widespread and growing support by the Iraqi people to the PMOI which I have noted in my trips to Iraq has angered the Iranian regime." He reiterated: "The PMOI is the main obstacle to the fundamentalist regime’s expansionist policy to Iraq and people of that country have great respect for them."

Casaca also rejected the policy of appeasement as a failed policy and called for immediate removal of the PMOI from the terror lists in Europe as well as the U.S.

Tunne Kelam followed remarks by Casaca and expressed his outrage at the extent in which Tehran regime is trying to silence its main opposition even in Iraq. In the meantime he admired the PMOI for its determination to overthrow the clerical regime in Iran despite all odds.

The NCRI’s Foreign Affairs Committee Chair thanked speakers for their kind remarks on the Iranian Resistance and expressed his gratitude to all those who responded rapidly to a call against the clerical regime’s ploys in Iraq against the PMOI based in Ashraf City. He also described rapid response by the Iraqi politicians, groups and public to the Iranian regime’s attempt to impose restrictions on the PMOI’s right to free speech, as recognized by the international conventions, encouraging.

Mohaddessin hoped that the international solidarity with the Iranian Mojahedin would eventually persuade the government in Iraq to realize its obligations towards the PMOI under the Fourth Geneva Convention.

In response to the question why the regime waged such a campaign against the PMOI while it was unarmed and under many restrictions, Mohaddessin said: "The regime is trying to remove all obstacles on its way to takeover the country. PMOI is the most important political and cultural obstacle to the regime and as Mrs. Rajavi stated in 2003, mullahs’ meddling in Iraq is far more dangerous than their nuclear threat." He then reiterated: "The regime considers Iraq as its prime and most important step in its bid to form an Islamic Empire."

NCRI’s official noted that the regime’s extraordinary aggressive policy and more belligerent rhetoric against the Middle-East Peace started when it succeeded to expand its influence over Iraq. He told the MEPs that their help and support to the Iranian Resistance was not only a help to establish democracy in Iran but also a help for democracy in Iraq and peace in the Middle-East.

The Swedish MEP, Eva-Brit Svensson, praised the role of the women in the Iranian Resistance and described Mrs. Rajavi as the symbol of resistance for all Iranian women, the women who were determined not to surrender to the religious dictatorship. She also joined other MEPs in calling for removal of the PMOI from the terror list.

Fernandez of Portugal from the Socialist group told the Euro MPs of his meetings with Mrs. Rajavi and stressed that he was confident that the Iranian people would be able to bring about democracy to their country under her leadership.

From Denmark, Mogens Camre said that we in the West should not just talk while people of Iran are suffering under the clerical regime. He stressed that years of negotiations with the regime in Iran did not lead to any change in its attitude and in the meantime it was the Iranian people and the resistance who paid the price. In another part of his intervention he noted that the PMOI has been acting as the main obstacle to mullahs’ fundamentalist plans in Iraq and reiterated that their rights in that country should be respected including right to free speech.

Dr Zvernia from Czech Republic described Mrs. Rajavi as the only hope for democracy in Iran and called on the Iraqi government not to give in to pressures by the mullahs and allow freedom of activities for PMOI in Iraq in compliance with the Geneva Conventions.

Casaca closed the meeting by reminding that the West owes a great deal to the ongoing resistance of the PMOI against the ruling religious fascism in Iran and emphasized that the MEPs should do everything to remove the organization from the list of terrorist organizations.