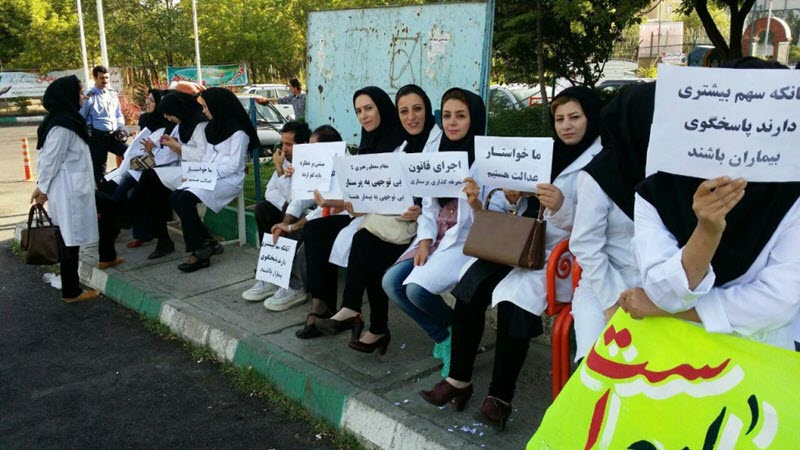 The head of Iran’s Nursing Organization admitted on Wednesday, August 7, 2019, that Iran is facing a shortage of 150,000 nurses due to emigration of Iranian nurses.

The reason for nurses leaving the country, the official said, is low salaries in Iran, adding, “Everyday, emigration of nurses from Iran is increasing because Iranian nurses are welcomed in foreign countries.”

“We are looking to give hope to 60,000 nursing students, but it would be noted, if our nurses get $250 [monthly] in Iran, Arab countries give them $2,500,” Asghar Dalvandi added. His remarks were published by the Fars News Agency, affiliated to the regime’s Revolutionary Guards.

In June 2019, the regime’s Deputy Health Minister said Iran was suffering from a “serious shortage of physicians” as thousands of local doctors have emigrated.

Iraj Harirchi told the state-run Iran Students News Agency (ISNA): “For every 1,000 Iranians, there are only 1.6 general practitioners, dentists, and specialists, while the least ratio to meet the country’s demands should be 2.5 doctors per 1,000 persons.”

The proportion of physicians to the population is one of the criteria to determine a nation’s development in the health sector, with the density of health workers, including physicians, nurses and midwives, and community health workers, showing the availability of medical personnel.

The World Health Organization (WHO) estimates that a country needs at least 2.5 physicians, nurses, and midwives per 1,000 people to ensure that people received sufficient primary care.

Harirchi has previously said that around 15,000 physicians in Iran have stopped practising due to the pressures on them, with many emigrating or changing their job. In 2016, it was reported by Iranian news outlets that 1,980 physicians left the country in 2014 and 2015.

Meanwhile, Health Ministry officials report that over 1,000 nurses leave Iran every year, with the Parliament’s Health Commission Speaker Heidarali Abedi saying that Iran is suffering from a shortage of nearly 100,000 nurses.

Abedi told the commission in November that while a nurse-to-bed ratio of 2.5 is recommended by healthcare management experts, Iran’s current ratio is closer to 1.7. He said that there are only 89,000 nurses currently working in Iranian hospitals, but the country needs tens of thousands more.

Abedi, the regime’s MP from Isfahan, said that this shortage means that most nurses work an average of 150 hours of overtime per year.

One of the reasons for the shortage is that nurses are leaving for other countries in order to get better pay and working conditions, according to the Vice President of the Iranian Nursing Organization Mohammad Sharifi Moqaddam.

He said: “Most of the Iranian nurses emigrate to Australia, Canada, the UK, the Netherlands, and Switzerland.”

However, many nurses are also drawn to Turkey and Persian Gulf countries.

Iranian nurses, who have repeatedly gone on strike over their working conditions, are particularly dissatisfied with a governmental plan called “Health Development,” which provided a three-fold rise in physicians’ pay, but no significant increase in nurses’ pay.

On May 30, 2018, Sharifi Moqaddam told the state-run ILNA news agency: “All over the world, there are incentives for such stressful jobs. One of the reasons why Iranian nurses decide to leave the country to work abroad despite having to endure being away from home and family is that they don’t receive the attention they deserve.”

“What has irritated the nurses is discrimination,” asserted Sharifi-Moghadam, adding “when nurses are subject to this much discrimination, they prefer to leave their job and stay home. That’s why the number of nurses who have quit their jobs is higher than those who emigrate from the country.”