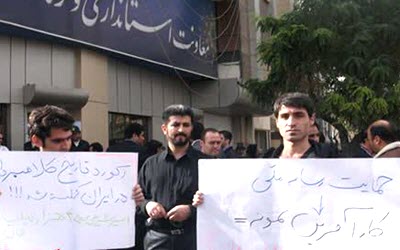 NCRI – On Monday October 3, victims of “Sayeh Gostaran of Iranian Lives” who lost their assets due to fraud by this company staged a protest gathering in front of the Court Branch 31 in Shariati Ave in Tehran and called for the remaining cases and records of this company’s frauds to be sent to court.

The Cooperative company “Sayeh Gostaran” is under the management of Amir Sharifi who was introduced by Ahmadinejad’s government as the top entrepreneur in 2013 creating jobs in the province of Alborz and was present in the government’s provincial trips.

The company received license from the Ministry of Agriculture and Ministry of Cooperatives in order to create domestic jobs and started “widespread advertising in the National TV and various radio and television networks” to attract public capital in line with the so-called “resistive economy” on the ground of “producing organic fertilizer vermicomposting” and relevant agricultural products through its headquarters in Karaj, Tehran and agencies located in cities across the country.

However, after a year, concurrent with obtaining high liquidity, the company’s offices suddenly closed and Amir Sharifi disappeared. But after a while announcing lack of safety for his life from the (threat of) creditors and victims, he introduced himself to the authorities and has since been sent to prison.

Previous articleIranian regime’s participation in the killing of people in Aleppo
Next articleIran: Poor conditions of Zahedan prison and pressure on inmates

Shamsi Saadati - 26th May 2020
As the coronavirus death toll continues to surge, instead of helping people, the Iranian regime’s officials are trying to shift the blame to poor people.   The Iranian regime initiated a...