Iran has the highest road death rate in world: official 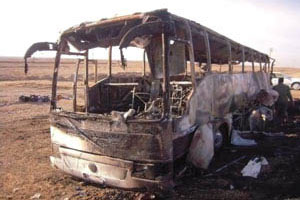 An officials of the Iranian regime’s Health Ministry says with at least 27,000 killed in road accidents across the country, Iran under mullahs rule has the highest road deaths per capita in the world.

According to the report by the Ministry of Health, for every 10,000 vehicles in Iran 120 accident occur while in France the rate is as low as 12 accidents.

On many occasions, the fatal road condition in Iran has sparked protests by relatives of victims of a road accident.

Road traffic accidents also injure or disable 300,000 people a year in Iran, which has a population of around 77 million.

Based on these figures the number of victims of road accidents in Iran are 45 times higher than industrial countries.