EN FR DE IT AR ES AL
Home News News: Society Iran has the most unsafe roads in the world, half a million...
NewsNews: Society

Iran has the most unsafe roads in the world, half a million people killed on roads 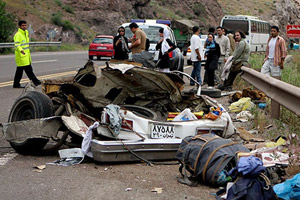 During a period of 20 years more than 400,000 people have lost their lives on Iranian roads. Last year alone, 17,000 people were killed and 300,000 injured as a result of driving accidents. The rate of road accidents in Iran has been 20 times the world average. Every 19 minutes one person is killed in a road accident.

State-run Mehr News Agency reported on May 18 that: “According to Statistics of the Coroner’s office from 1994 to 2014 more than 400,000 people lost their lives in traffic accidents, and in the latest statistics of this organization in the past year about 17,000 deaths and 300,000 injured have been recorded as a result of car accidents.”

According to figures from Iran’s coroner’s office, in the four months of the Persian year 1393 (2014), 5,801 people lost their lives in car accidents. This figure is higher than those Americans killed in the Iraq war in 2003 (4,487). Qadir Mahdavi, President of the Insurance Institute, acknowledged that the mortality rate in Iran in comparison to other countries is high (IRNA website Sept. 20, 2014).

Earlier, the representative office of the World Health Organization (WHO) in Iran found the rate of road accidents in Iran to be 20 times higher than the world average, and said that in Iran every 19 minutes one person loses their life on the roads.

According to IRNA: “Many experts believe that another reason for the increase in road accidents is work pressure on drivers. Because of the crippling costs of living, inflation and high prices, often we see that people who are driving, have a few jobs so that they can provide for their livelihood. In these circumstances, fatigue and sleepiness overcome the driver and affects his or her balance.”

This government expert added: “Bearing in mind that the standard of domestically built vehicles and some imported vehicles are at a low level and until these technical deficiencies are removed, we cannot expect the number of road accidents to decline.”

He said: “One of the main reasons for accidents is the poor state of the roads. Low capacity of the roads and the low level of technical standards are amongst the main causes of road accidents.”