Iran: How Did you Kill my Sister and Brothers and Where Did you Bury them? 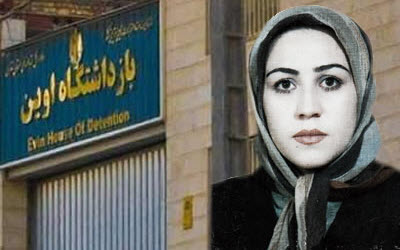 NCRI – Four members of her family, three brothers and one sister, were executed for supporting the People’s Mojahedin Organization of Iran (PMOI or MEK) and she only received a few bags containing their belongings. Her sister and one of her brothers were executed during the 1988 massacre of 30,000 political prisoners in Iran and now Maryam Akbari Monfared has filed official complaint from the prison and asked Tehran prosecutor’s office to investigate the death of his brother and sister who were executed in the summer of 1988 while serving their prison sentences.

She asked the families of other victims of the (killings and massacre in) 1980s to officially demand “the indictment of the victims and those who were executed in the 1980s be made available and published.” She also asked the families to demand and follow up on the “trial of the masterminds and perpetrators of the executions in 1980s and massacre of political prisoners in 1988 and announcement of the names of those buried in Khavaran cemetery and other mass graves.”

Maryam Akbari’s life story is bitter and full of ups and downs. She herself was arrested in December 2009 after the 2009 uprising and the Ashura protests. In 1 June 2010, the notorious Judge Salavati sentenced her to fifteen years in prison on the charges of “Moharebeh (waging war against God)” through membership in the PMOI.

Maryam has repeatedly denied the charges but judge Salavati has said only one sentence to her: “You suffer (are sentenced) because of your siblings.” Four of her brothers and sisters have earlier been executed by the regime on the charges of supporting the PMOI. Several members of his family are living in Albania but she is not allowed to meet them.

Now spending her 7th year of prison sentence, she decided to file a complaint against the perpetrators of 1988 massacre. She wrote an agonizing letter in which she said: “Many of those who were executed in 1988, including my sister and brother, had already been sentenced to prison terms. They had been tried in courts that lasted a few minutes without due process and their crimes were at most reading or distributing newspaper (published by the PMOI) or participating in peaceful demonstrations.”

Abdolreza Akbari Monfared, the younger brother of the family, was arrested in 1980 at the age of 17 and “his crime was distributing ‘Mojahed’ newspaper. He spent three full years in solitary confinement in Gohardasht (Rajaei Shahr) prison.” He was sentenced to three year imprisonment but held in prison until the summer of 1988 when he was executed during the massacre of political prisoners.

Gholamreza Akbari Monfared, another brother of Maryam, was arrested in 1983 and executed in 1985.

Alireza Akbari Monfared, another brother of Maryam, was also arrested on 8 September 1981 and executed in prison 11 days later on September 19 of the same year. “The whole process of his arrest, trail and implementation of death sentence lasted only 10 days. In his commemoration ceremony on the seventh night of his death, the regime agents raided our house and arrested a number of people and transferred them to Evin prison and the Joint Committee detention. Among those arrested were my mother and my sister, Roghiyeh Akbari Monfared,” Maryam writes.

Her Mother’s prison term was not long and she was released after 5 months. But Maryam’s sister, Roghiyeh, remained in prison and was later sentenced by a court to 8 years imprisonment which ended in the summer of 1988 following her execution during the massacre of political prisoners.

In another part of the letter, Maryam writes about her father’s fate and that he did not have a chance to see his children again at Camp Ashraf before passing away. Maryam writes: “My father, Ali Osat Akbari Monfared, passed away in 2005 after years of suffering due to imprisonment and execution of his children and disappointment to meet again with his other children who were at the time in Camp Ashraf because meeting with them was prohibited [by the regime] and considered a crime. Right now, some of my family members – including my brother, sister, nephew and niece – are in Albania and we are not allowed to meet (visit) them.”

In addition to Maryam, her other brother, Reza Akbari Monfared, 63, is spending his 17 years prison term in Gohardasht prison. Regarding all the pressures put on the families of the victims of the 1980s killings and massacre by the regime, Maryam writes: “All the pressure that put on us is now imposed on our families and is affecting their lives. Some families are torn apart after all the sufferings and many others are suffering from various physical and mental illnesses. Some of them are forced to fled the country and migrate to other countries and many others live [in isolation] in the corner of their privacy. The arrest and detention of our loved ones were like kidnapping. We were not informed about the time of their trail or their whereabouts.”

As she narrates, after the executions, they [the mullahs’ agents] not only did not release the will and testament of those executed to their families, but also “refused to hand over their bodies to the families and kept secret their burial place as well. They did not even allow us over these years to hold a memorial ceremony (mourning) for our loved ones. First, they threatened us and closed on us an unnamed cemetery, now known as Khavaran cemetery, which is the burial place of our loved ones. Another time they turned the graves of our loved ones upside down and smashed their tombstones.”

It seems after the release of an audio file Maryam’s grieving was refreshed. In the audio file, Ayatollah Montazeri, former Deputy Supreme Leader and Khomeini’s nominated successor at the time, exposes the 1988 massacre of 30,000 political prisoners in Iran and harshly criticizes members of the “Death Commission” in Tehran, including Mostafa Pour-Mohammadi (current Justice Minister in Rouhani’s government), Hossein-Ali Nayeri, Morteza Eshraghi, and Ebrahim Raeisi, responsible for the massacre. Referring to the audio file, Maryam believes that the execution of political prisoners including her sister and brother in 1988 was illegal and against the laws.

According to a new law on due process and approximation of penalties, Maryam Akbari Monfared should now be released from the prison, but her request for retrial and implementation of the new law has been under consideration and review by the Supreme Court for months.

During this time, she was not even granted furlough for her daughter’s surgery. She concludes her letter with these words: “Now that I am writing this letter, I do not know after releasing the letter what fate awaits me. But with the knowledge of all possible consequences, I demand clarification on how the 1988 massacre of political prisoners, especially my sisters and my brother, was carried out.”

Previous articleIran Regime MP: “I Read a book on the Dimensions of Corruption in Iran and I Cried”
Next articleIRAN: Approaching sham Election, Escalation of power Struggle in the Clerical Regime and the Resignation of three Ministers

The Iranian regime’s Judiciary has upheld the death sentence for Navid Afkari Sangari, arrested during 2018 nationwide Iran protests in Shiraz. There have been...
Read more
News

Family members over 30,000 Iranian political prisoners massacred in 1988 gathered in Khavaran, near Tehran on Friday, at the site of one of the mass graves identified to commemorate their loved ones. 32 years...
Read more
News