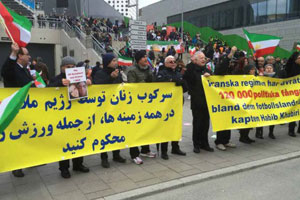 NCRI – The State Security Council in Iran has not approved any plan which would let women and families attend some sports event in the country, an Interior Ministry official said on Sunday.

“Babak Dinparast, the head of Information and international Affairs Department in the Interior Ministry has denied the reports published in recent days by some news outlets indicating that the State Security Council has approved the presence of women and families in sport events,   the state-run Tasnim news agency reported on Sunday.

Dinparast was quoted as saying: “The State Security Council did not have any plan approving presence of women in sport stadiums.”

Iran recently lost a bid to host the 2019 Asian Cup United Arab Emirates, with some officials saying that rules forbidding women from watching football in stadiums played a role in the decision.

Previous articleIran: Mine workers sentenced to flogging and prison for protesting layoffs and low wages
Next articleU.S. policy should focus on Iranian interference in region: Washington Post