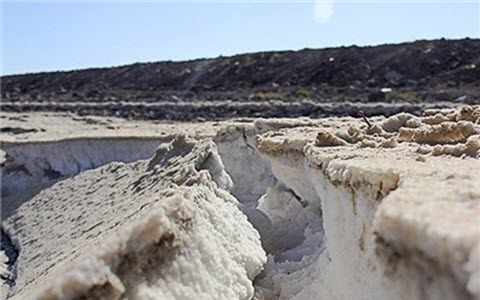 NCRI – Lake Urmia in northwest Iran is on the verge of downright drying, according to the director general of crisis management bureau in West Azerbaijan Province.

“If Lake Urmia is not revived, the lives of more than 14 million people will be at risk, endangered by various diseases,” said Amir Abbas Jafari on Sunday.

“Lake Urmia’s drought is not only linked to the governments but also is related to changing environment conditions, famines, increasing water consumption, the humane factor and decreasing rains,” he said.

“Each year we must decrease an average 8% of agricultural water usage in a five-year plan, and decrease water usage by 40%,” Abbasi continued.

On July 5th an Iranian MP by the name of Hazratpour representing the city of Urmia made further remarks about this lake in an interview with semi-official media outlets.

“What you see in the numbers about Lake Urmia is different from the residents of that region,” he said.

On July 14th, despite a heavy security atmosphere, a group of people and environment activists of Urmia formed a human chain in an effort to demand protection for the lake.

At first security forces and the anti-riot guard prevented the activists from forming a human chain, dispersing the crowd. The people resisted, however, and formed their chain in protest.

The chants heard at this gathering were:

The government has ordered its killing

Lake Urmia is drying up

Azerbaijan will lose deeply if it fails to rise

Lake Urmia, with a surface area of over 3% of Iran, was in the past filled with the waters of 60 seasonal and permanent rivers. This lake has been drying since the early 2000s due to the mullahs’ policies, and is now on the verge of complete drying.

Satellite images in 2015 show 88% of this lake has already been lost.

Studies by global researchers show drought has only lead to a 5% decrease in rains near this lake, while dam construction and digging deep wells by groups affiliated to the Revolutionary Guards’ Khatam al-Anbia Company, parallel to constructing a 15-kilometer highway on the lake have brought it on the verge of total drying.

Previous articleFormer Tehran U. President: Even Senior Officials Are Constantly Talking About Regime Change
Next articleHalf of Iranian Students Drop out of Schools Due to Economic Problems