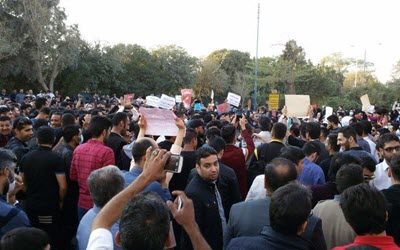 The protesters demanded a halt to all projects rerouting river waters in this province to other areas, dam construction, drying lagoons, measures to resolve continuous water and power outages resulting from dust storms, and immediate action to respond to the air contamination disaster.

This gathering was held under strict security conditions. Security forces had blocked all roads leading to the protest site and downtown Ahvaz in an effort to prevent protesters from joining ranks.

Various protesters were seen wearing masks in an expression of protest to Rouhani’s inaction.

Various police and security forces sought to infiltrate into the protesters’ lines. Yet the people were very aware and introduced them to each other.

Coinciding with Rouhani’s presence workers of the Iran Steel Industrial National Group rallied outside the Ahvaz branch in their 11th day of consecutive protests near the Ahvaz airport. This rally was protesting the air contamination catastrophe in Khuzestan Province, skyrocketing unemployment and the state refusing to pay workers’ paychecks.

Placards were raised by protesters reading, “Rouhani, what happened to your pledges?” “The war is over… but Khuzestan is in worse conditions than a chemical attack.”

Khuzestan Province has suffered from dust storms from 2001 and experts have said 35% of the dust storms are from local centers.

The area of active dust centers in Khuzestan equals to 350,000 hectares, research shows, and these numbers increase to 800,000 hectares considering the increasing winds and desert storms.

Prior to this 30,000 hectares of these centers were in highly critical conditions, all located east of the city of Ahvaz and the Hur al-Azim lagoon.