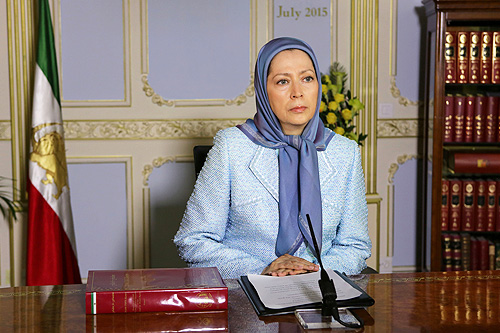 NCRI – Iranian opposition leader Mrs. Maryam Rajavi has this week sent a message to Christian leaders of the world, exposing the oppression of religious minorities in Iran and urging Christian leaders to inform the public about the inhumane practices of the regime in Iran and to distinguish between true Islam and Islamic fundamentalism.

Mrs. Rajavi, President-elect of the National Council of Resistance of Iran (NCRI), made the remarks in a video message on July 12, 2015.

The NCRI, Iran’s Parliament-in-exile, has adopted a Plan on the Provisional Government’s Relations with Religion.

Below is the full text and video clip of Mrs. Rajavi’s message.

Message of Maryam Rajavi to Christian Leaders:
We struggle to achieve peace, fraternity and coexistence which are the supreme values in Islam

Honorable Faith Community Leaders,
Advocates of the path of Jesus Christ, the great messenger of peace and emancipation,

I am speaking to you as an Iranian, someone from the Middle East, the land of Abrahamic prophets, where Christians, Jews and Muslims, Shiites and Sunnis have co-existed hundreds of years with love, friendship and brotherhood.

Yet today, this land is burning in the fire of extremism, a fire where Christians, Jews and Muslims, Shiites and Sunnis burn alike.
Most have forgotten that for the past three decades the Iranian regime has been carrying out atrocities that are far more horrific than ISIS.

Under Rouhani’s term, the Iranian regime has horribly intensified inhumane punishments, such as eye-gouging, limb amputation and executions because it fears the Iranian people.

More than 1,800 have been executed so far under Rouhani.

Since the onset, the regime has oppressed and harassed religious minorities, including Sunni Muslims, Christians, Jews, Baha’is and followers of other faiths.

And now, several Christians, including Saeed Abedini, have been imprisoned.

The current regime ruling Iran is the epicenter of extremism.

It is the godfather of terrorism, ISIS and other terrorist groups in the region. Instability in the Middle East will inevitably endanger global peace and security.

I must emphasize that crimes carried out by the mullahs, their affiliated militia and other terrorist groups like ISIS under the banner of Islam have nothing to do with Islam. Islam is the religion of compassion, friendship and tolerance. As the Holy Quran says, “There is no compulsion in religion.”

We have learned Islam from the Quran, the life of the Prophet Mohammad, and other historic leaders of Islam. Islam and the Quran do not discriminate among Mohammad, Jesus, Moses and other prophets or among their followers.

Our Resistance has been struggling 35 years to reveal the mullahs’ false claim to Islam and the crimes they attribute to it. We struggle to achieve peace, fraternity and coexistence which are the supreme values in Islam.

It is necessary that Christian leaders inform the public about the Iranian regime’s threats and inhumane practices and tell them about the distinction between true Islam and what fundamentalists portray of Islam.

Supporting the Iranian Resistance for regime change in Iran is a major step in line with the establishment of peace and tranquility as well as putting an end to the filthy war that is expanding by the day.

We can see the results and impact of the efforts of many faith leaders especially in America.

The faith community in the United States has always supported the just ideals and goals of the Iranian Resistance to establish a free and tolerant society.

Your generous support has helped to protect the lives of the combatants of freedom at Camp Liberty.

The residents of Liberty are sacrificing every day and endure the most difficult conditions. The late Dr. Martin Luther King said it once, “human progress is neither automatic nor inevitable. … Every step toward the goal of justice requires sacrifice, suffering and struggle.” And the residents of Liberty pave the way of peace, love and justice.

Today, the Middle East is facing a watershed moment. Moderate forces striving for human rights must be supported. And faith community leaders can contribute a great deal toward the establishment of a free Iran, where human rights are respected.

Thank you and God bless you all.