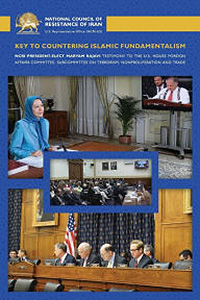 NCRI – A recent testimony by Iranian opposition leader Mrs. Maryam Rajavi before the U.S. House Foreign Affairs Committee’s subcommittee on Terrorism, non-Proliferation, and Trade on the threats posed by ISIS and Islamic fundamentalists and the solutions to the crises in the Middle East have been published in a new book.

On April 29, 2015, Mrs. Rajavi testified before the House of Representatives subcommittee via video-link from her headquarters in Auvers-sur-Oise near Paris, France. The complete text of Maryam Rajavi’s testimony was subsequently published on the Congressional website.

The new book published by the National Council of Resistance of Iran-US Office contains Maryam Rajavi’s full testimony as well as the transcript of the question and answer session that followed with Representatives.

Maryam Rajavi is the president-elect of Iran’s parliament-in-exile, the National Council of Resistance of Iran (NCRI), which seeks a secular, democratic, and non-nuclear republic in Iran.

In her testimony to the U.S. House of Representatives, Mrs. Rajavi outlined specific steps that need to be taken by the United States to defeat ISIS and most importantly to eliminate the epicenter of Islamic extremism and terrorism in the region.

Mrs. Rajavi offered a solution and emphasized on the role that the Iranian opposition has to play in bringing about change in Iran and have a positive impact in the region.

The main democratic Iranian opposition group People’s Mojahedin Organization of Iran, PMOI (Mujahedin-e Khalq, MEK) has been a pivotal force for the past 50 years in the struggle against fundamentalist interpretation of Islam. The PMOI’s comprehensive interpretation of Islam has proven to be more persuasive and appealing to the young generation.