Iran: Mine workers sentenced to flogging and prison for protesting layoffs and low wages 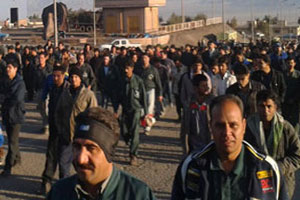 NCRI – A so-called court in Iran sentenced five protesting mine workers to one year in prison and lashes for ‘disturbing public order’ during last year’s massive protests against layoffs.

Over the past two years over a thousand workers at Chadormalu iron ore mine, located in the central province of Yazd, held a series of gatherings and sit-ins protesting against layoffs and low wages.

Dozens of workers were either arrested or summoned to courts at the request of the employers. A group of 38 workers were arrested in February 2014 but released a few days later. Another group of 31 workers were summoned to a court last year. The recent court ruling was issued following members of this group of which five were sentenced to flogging and imprisonment for ‘disturbing pubic order’.

The employers at the mine company introduced the five workers as leaders of the protests and had demanded that they be dealt with harshly.

Earlier this morning, the clerical regime Iran hanged Mostafa Salehi, one of the prisoners of the Dec 2017-January 2018 uprising, in Dastgerd prison in...
Read more
News: Human Rights

The People’s Mojahedin Organization of Iran (PMOI-MEK) announced this afternoon, August 4, 2020, that Coronavirus has taken the lives of more than 82,600 in 350 cities across Iran....
Read more
Search