IRAN: Mullahs expose their fear of PMOI by attributing lies to the ‘dead’ 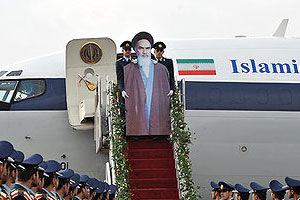 NCRI – The Iranian regime has broadcast a report marking the anniversary of arrival of the founder of the clerical regime to Iran from France 36 years ago.

The report aired on Sunday (February 1, 2015) showed images of Neauphle-le-Château, a village in the north-central region of France, where Khomeini lived in 1979.

While showing images of the village, the reporter said: “The residents of this village still remember Khomeini.”

The images of the building in which Khomeini lived were shown as the reporter continued: “This is the famous building where Imam (Khomeini) was residing. The then mayor of this village 36 years ago speaks about the sensitive nature of Khomenei’s residence and explains how the People’s Mojahedin Organization of Iran (PMOI) blew up the two story building in the garden years later.”

The Iranian regime – that is extensively worried about the increasing popular support for the PMOI (MEK) inside Iran and abroad – is resorting to absurd lies such as that the PMOI blew up Khomeini’s residence in Paris.

It is common knowledge that the Iranian regime is a record holder in many areas such as executions, including of children; and is central banker of terrorism.

The mullahs have also set new standards in the field of lying.

Fernand Perrrier, the mayor of Neauphle-le-Château in 1979, and which the Iranian regime is quoting 36 years later, unfortunately passed away in 1980 and cannot now hear the absurd lies regarding an explosion happening ‘years later’ attributed to him in 2015 by the Iranian regime’s state-run network.

This is not the first time that the Iranian regime has ludicrously attributed lies to the ‘dead’.

In September 2014, the French judiciary vindicated the members of Iranian Resistance of all the charges brought against them as a part of deal between the French government and the Iranian regime in 2003.

When the Iranian regime that saw its plots against its main opposition had collapsed, it resorted to filing an appeal on behalf of someone who had died in 2005, according to a British court document.
The case became another scandal for the regime. The famous French satirical weekly newspaper Le Canard Enchaîné in a piece called on the dead to rise up and wrote it seems that when the Iranian regime cannot attribute lies to the living, it does so to the dead.