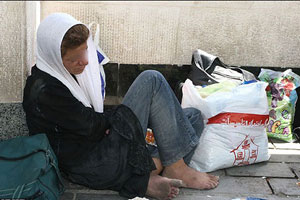 In a shocking statistics, Rahmatollah Hafezi, an official of Tehran Municipality, acknowledged that there are 3000 women who sleep in the streets just in Tehran alone. According to Reza Jahangiri, another official of Tehran’s municipality, the average age of these women has declined to 17-18 years. He stated that the reason for the increase in the number of women who sleep in the streets is due to the spread of addiction.

Hafezi, Chair of the Health and Environment Commission in the city council, announced on Friday, November 21, that the number of tramps in Tehran is 15000. This regime official acknowledged that the clerical regime has not provided any shelter for these wretched women. This is at a time when the cold season has caused harsher conditions for the poor and in the past two weeks people in 14 provinces are living in difficult conditions due to the heavy snow and rain fall (Tasnim News Agency, affiliated with the terrorist Qods Force – November 21).

Ms. Sarvnaz Chitsaz, Chair of Women’s Committee of the National Council of Resistance, expressed her abhorrence regarding the wretched condition of women who are victims of the mullahs’ tyranny and said: “This shocking statistics which in reality is far less than the actual numbers, is just a glimpse at the catastrophic condition that the evil rule of the mullahs has imposed on the Iranian people and in particular the defenseless women and children.”

The Iranian women and children have to live such a horrible life while just one of the foundations that belong to the regime’s supreme leader has plundered 95 billion dollars of Iranian peoples’ wealth and while in the power struggle among regime’s officials, greater dimensions of the plunder of the national wealth by various ruling factions is disclosed every day.

Ms. Chitsaz emphasized that as long as the criminal regime of the mullahs reigns in Iran, the cycle of livelihood of Iranians and the condition of women will spin on suppression, poverty and gloom. The sole solution for the emancipation of the Iranian people, especially women and children, from the misery caused by the mullahs is the overthrow of this anti-human regime. The struggle to attain this national aspiration is the foremost duty of every Iranian. This is a struggle where the free women of Iran are its vanguards and the 1000 women members of PMOI in Camp Liberty act as their guide.

Women’s Committee of the National Council of Resistance of Iran
November 23, 2014