By CLAUDE SALHANI (Editor, Middle East Times)
Source: Middle East Times
New revelations on Iran’s nuclear ambitions smuggled out of the Islamic republic by a network of the opposition group, the Mujahedin-e Khalq, (MeK), and made available to the Middle East Times, indicates that Iran is very much on the path of becoming a nuclear power.

"It is stunning," Alireza Jafarzadeh, author of "The Iran Threat: President Ahmadinejad and the Coming Nuclear Crisis," told the Middle East Times. 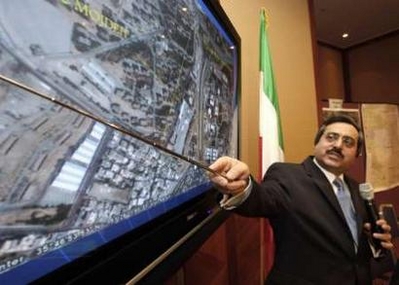 By CLAUDE SALHANI (Editor, Middle East Times)
Source: Middle East Times
New revelations on Iran’s nuclear ambitions smuggled out of the Islamic republic by a network of the opposition group, the Mujahedin-e Khalq, (MeK), and made available to the Middle East Times, indicates that Iran is very much on the path of becoming a nuclear power.

"It is stunning," Alireza Jafarzadeh, author of "The Iran Threat: President Ahmadinejad and the Coming Nuclear Crisis," told the Middle East Times.

"The International Atomic Energy Agency [IAEA] and its director general, Mohammed ElBaradei should immediately send their inspectors to these sites and interview all the named experts of the Iranian regime that are collaborating with the nuclear weapons program of Tehran," said Jafarzadeh.

"No IAEA report would be comprehensive if the new information is not taken into account. There are still very crucial nuclear sites uninspected, and key figures in Iran’s nuclear weapons drive not interviewed; how can we have a reliable IAEA report?" said Jafarzadeh, who maintains close ties with the MeK.

The stunning information – which, of course, could not be independently verified – involves top missile experts in nuclear weapons; a clear sign says Jafarzadeh that Tehran is getting closer to making its nuclear weapons operational.

The MeK report breaks down Iran’s two nuclear sections which had not been exposed yet. First is the command and control center as well as the main center for military nuclear research. The second is the regime’s nuclear warhead project.

The new information shows that: a) the Iranian regime is undoubtedly developing the nuclear bomb; b) none of the three essential parts required to build a nuclear bomb have been halted; rather, all three have been sped up.

Indeed, since April 2007, the Iranians entered a new phase in the controversial nuclear project; the establishment of a command and control center in Lavizan 2. This section operates independently from the defense ministry.

The center is known as "Mojdeh," and according to the MeK it comes under the direction of a scientist named Mohsen Fakhrizadeh Mahabadi. The 47 year old is a nuclear physicist and a member of the Islamic Revolution Guards Corps (IRGC) who reports directly to Defense Minister Mustafa Muhammad Najar.

The site is located at: Tehran – Lavizan, Mojdeh Street, toward Babai highway across from Nobonyad neighborhood (in the Noor township).

After the existence of the Lavizan-Shian site became known in 2003, activities were transferred to the Lavizan-2 site under the title of "Center for Readiness and New Advanced Defensive Technology."

In April 2007 the site underwent major changes within the MOD and became known as the "Field for Expansion of Deployment of Advanced Technologies."

Activities at the highly secretive site are under 24-hour watch by the security forces. According to a classified directive issued by the center’s intelligence office, all personnel working at the site have been instructed to conceal the location, even from their family members.

Some of the activities are disguised as part of Malek Ashtar University, since the site is adjacent to the university which acts as a center for research and development of weapons in conjunction with the Mojdeh site. Communications with the site is primarily carried out by the site’s administration and no outside contact is allowed.

The MeK report mentions 12 interrelated tasks for building an atomic bomb are being developed at this site; they include:

1. Scientists here are producing Polunium-210 and Beryllium for a trigger for the atomic bomb. To this end, Imam Hossein University is closely cooperating with the center. One of the scientists who has worked in this field extensively is Fereydoun Abbassi.

2. According to the information obtained by the MeK, this section has the ability of casting and machining enriched uranium hemispheres. This technology has strict military use.

3. Research on the fissile material needed for the production of a nuclear bomb, including highly enriched uranium and plutonium, is carried out under the supervision of nuclear physicists such as Fereydoon Abbassi and Mansour Asgari, among others.

4. Laser enrichment of uranium is under the direction of scientists such as Muhammad Bassam, who has worked on similar projects in the Parchin site.

5. Nanotechnology, widely used in the production of nuclear weapons, comes under the guidance of Saiid Borji, a scientist with a doctorate in material engineering and an expert on implosions. He is a member of the IRGC who is active in development of nanodiamond technology at Mojdeh. An application of nanodiamond is to enhance the quality of lubricants used in the machines. Borji is a specialist on lubricants for the advanced P-2 centrifuges. He is the top scientist in nanotechnology in Iran.

6. Research on high explosive work is the domain of scientist Ali Mehdipour Omrani. He is specifically engaged in high energy material and works closely with Borji. Explosion testing is done in the Parchin military site.

7. The Mojdeh site has been equipped with robots to facilitate experiments related to the production of highly poisonous nuclear material such as polonium, plutonium and Beryllium. Two scientists, Katanbaf and Vahedi, oversee this project.

8. Developing radiation detection systems, used to measure the amount of radioactive contamination and its effects on the environment.

9. Computers and electronic engineering are highly instrumental in developing a nuclear warhead and the missile control system. Mehdi Naghian Fesharaki, former head of research and development of Air and Space Industries Organization of Iran, and Mohammad Hossein Ghezelayaq, head of auxiliary research department at Malek Ashtar University are the two top experts at Mojdeh.

10. Regular checkups of armed forces personnel exposed to radioactive material was previously controlled by Atomic Energy Organization of Iran. Since December 2007 that task has been transferred to Mojdeh. The Novin Medical Radiation Institute, which is part of Mojdeh conducts all the research for military personnel. Such activities are indicative of the regime’s increased nuclear activities.

11. Reliable sources within the regime report that Tehran is actively pursuing the production of nuclear warheads in an area called Khojir. This is a vast area south-east of Tehran which entails an area of 120 square kilometers.

Khojir is a secured military area. It was secretly constructed in 1989 and is the primarily manufacturing site of missiles such as Shahab 3.

The project to manufacture nuclear warheads is called Nori Industry and is identified by the code "8500."

12. Alireza Nori Industry has its own security and its military police. Individuals who have clearance to other parts of the Khojir site are not allowed in section 8500. According to the reports, there are huge underground tunnels in this site, where warheads are being designed to be mounted on Shahab 3 missiles. The most advanced version of Shahab 3 has a range of 2,000 kilometers.

According to the MeK report the key figure in this project is Mehdi Naghian Fesharaki. He is in charge of designs for the construction of nuclear warheads and an expert in computers and electronics. He was previously the director of the Center for Training and Research of Aerospace Industries Organization (AIO). AIO is one of the organs of the defense ministry and is involved in manufacturing missiles.

Fesharaki was transferred to site 8500 two years ago. Military experts take this as an indication that Iran is getting to the point of connecting the nuclear weapons to the missiles.

The next step is rendering the missiles and their warheads operational.

Previous articleInformation by Iran regime not “complete”, not “consistant” – IAEA
Next articleIran regime could have enough uranium for a bomb by year’s end – EU experts