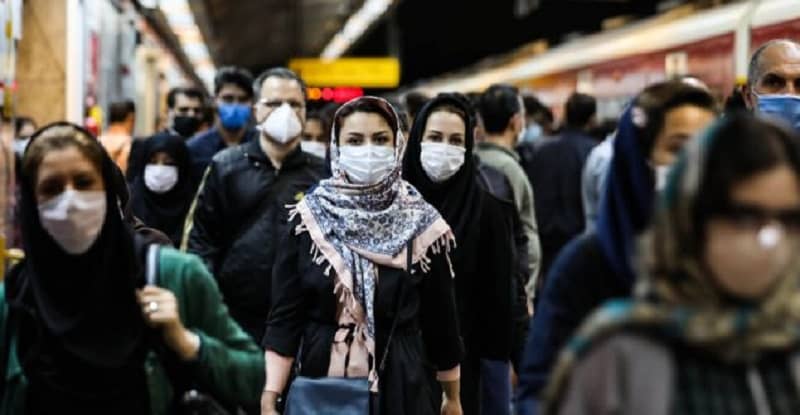 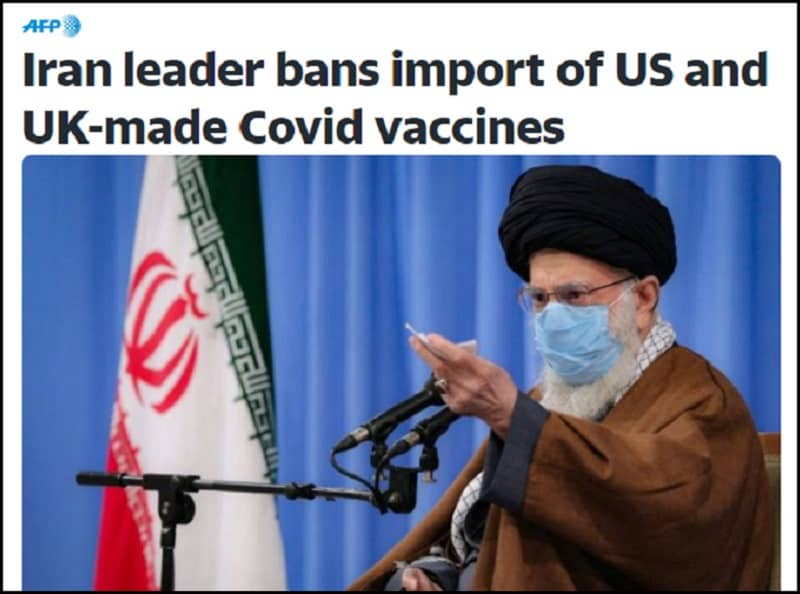 Iran’s supreme leader on Friday banned the import of American and British-produced vaccines against Covid-19, saying they were “completely untrustworthy”.

Responding to Khamenei’s move, the World Health Organization’s emergencies director Michael Ryan stressed that the world body had made repeated calls to “not politicise this virus”.

“Please, let us not politicise this vaccine either,” he said at a news conference in Geneva. 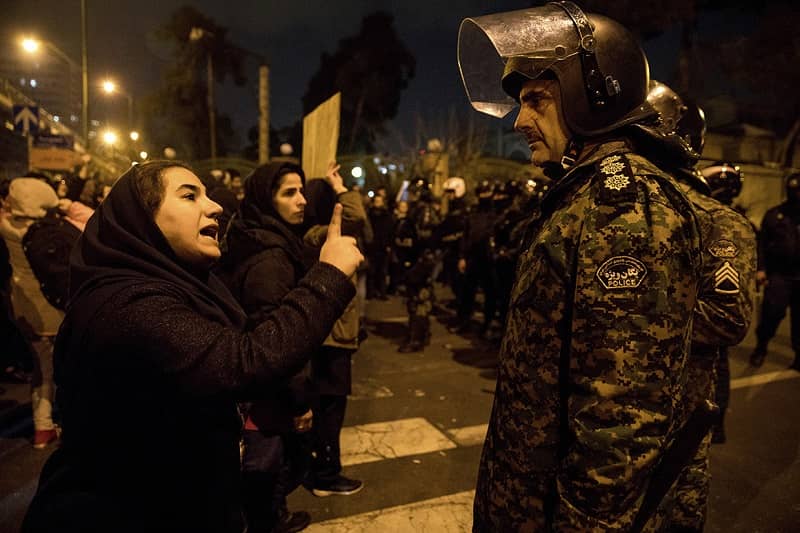 There were 4,482 recorded Iran protests in 2020 with an average of 373 protests a month, according to sources affiliated with the Iranian Resistance.

Protests were held despite of the spread of the COVID-19 virus and the regime’s brutal crackdown.

“Day Bank” investors protest outside the main branch of the bank

Jan. 9 – Tehran, #Iran
"Day Bank" investors gathered today outside the main branch of the bank and the Foundation of Martyrs and Veterans Affairs to demand their lost savings and their economic rights. #IranProtests pic.twitter.com/Kh9HhPMpyG

What Does Assadollah Assadi’s Trial Mean for Justice? 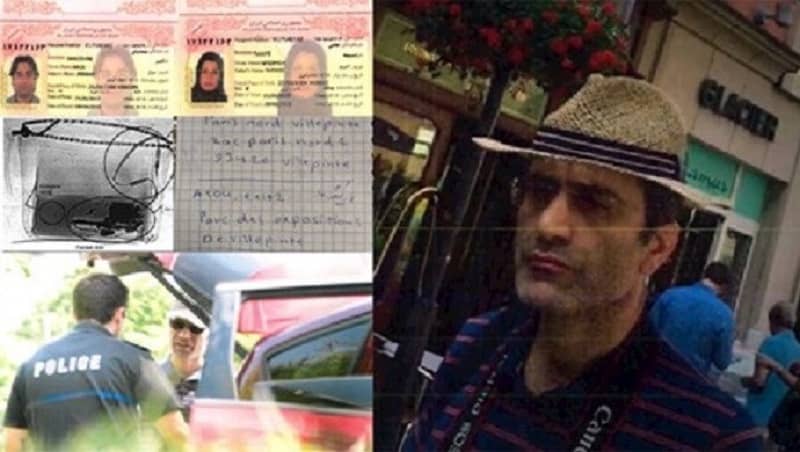 A Belgian court is expected to sentence Iranian diplomat Assadollah Assadi on charges of terrorism on January 22, following a historic trial where he became the first diplomat tried for terrorism in Europe, even though he is far from the first to have undertaken such acts.

The prosecution has laid out that, at the behest of the highest-ranking members of the Iranian regime, Assadi, a diplomat at the Iranian embassy in Vienna, trafficked explosives into Europe in his diplomatic luggage and hand-delivered them in Luxembourg to two terrorists he hired. The plan is that these two would set off the bomb at an opposition gathering in Paris, attended by 100,000 people, including hundreds of dignitaries.

More than a month since the arrest of Nazanin Mohammad Nejad, she is still confined in solitary

More than a month since the arrest of Nazanin Mohammad Nejad, she is still confined in solitary at Ward 2A of Evin. Her sister, Elham, posted a video on Jan. 8, saying despite repeated inquiries, their family were not able to visit her or find out the reason for her arrest. #Iran pic.twitter.com/4kcErtCAqw

International Policy Digest: Grounds for Optimism as Justice and Accountability Take Priority in Dealing with Iran 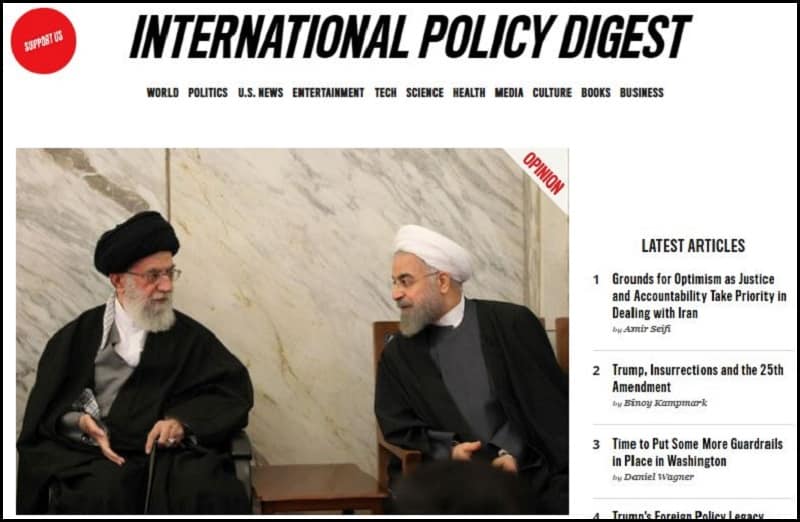 As an Irish-Iranian, I am delighted to be entering 2021 with a renewed sense of hope regarding the future of European policy towards my homeland. For most of my life, I have watched with dismay as Western leaders have allowed the Iranian regime to get away with murder – sometimes literally. But now justice is coming to at least two agents of the Iranian regime, and this could very well set the stage for broader campaigns of accountability.

Maryam Rajavi: Khamenei’s ban on the purchase of the vaccine for Coronavirus is deliberate massacre of the people of Iran 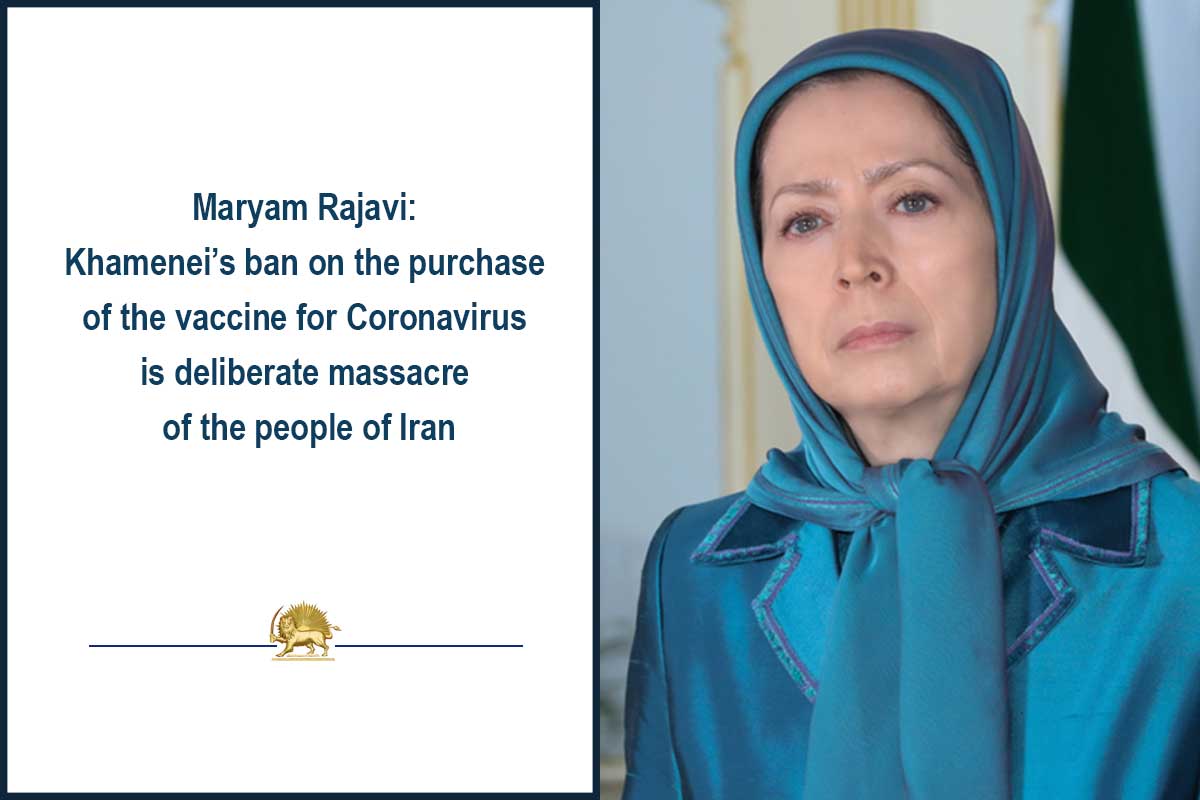 Having access to vaccines is an inalienable right of the people of Iran.
The death toll in Iran is nearing 200,000, but Khamenei said today that import of vaccines from the U.S., U.K. and France is forbidden. By causing huge human casualties, he seeks to fend off popular uprisings. The Coronavirus is an ally of criminal Khamenei against the people of Iran.

Khamenei’s Red Crescent announced that the import of 150,000 Pfizer/BioNtech vaccines had been banned. This costs people’s lives and is a deliberate massacre of the people. Having access to vaccines is an inalienable right of the sick and the Iranian people. Rise up and stand up to Khamenei’s criminal measure.

Coronavirus Disaster in Iran: The Staggering Number of Deaths in 478 Cities Had Exceeded 198,900 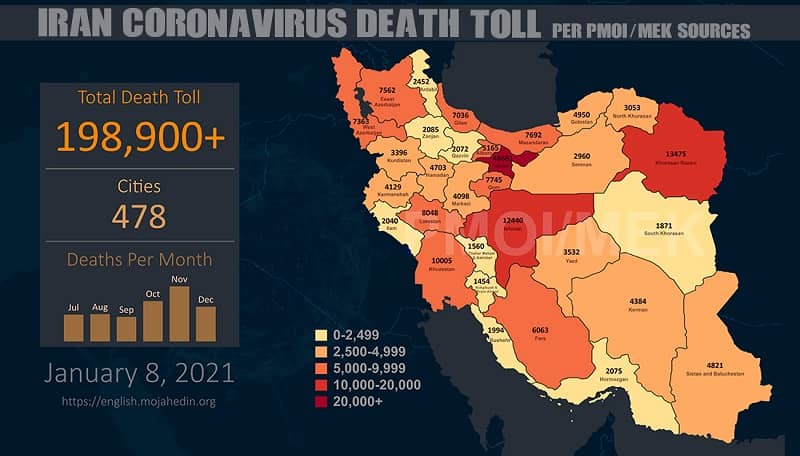 Iran's Supreme Leader banning lifesaving #COVID19 vaccines from the UK and US to millions of people in Iran is in step with the Iranian authorities' decades-long contempt for human rights, including the right to life and health. https://t.co/Y6hiVy5edF pic.twitter.com/Hlq6l8VfwP 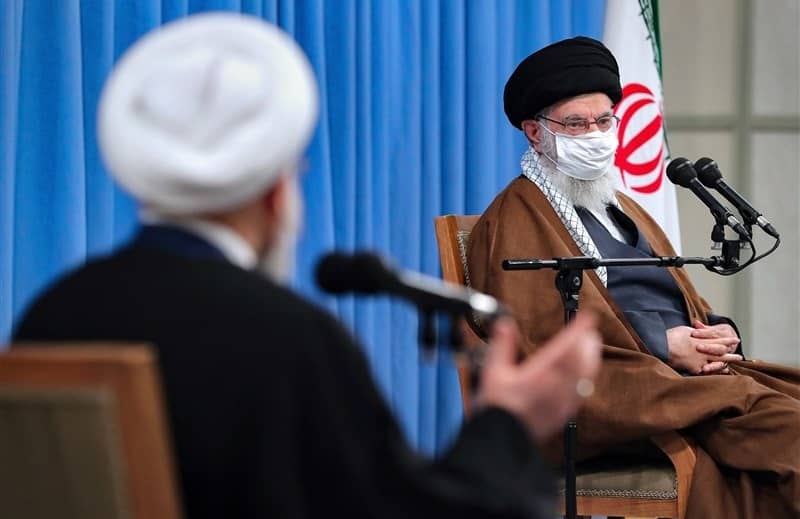 The Supreme Leader of the Iranian regime banned the import of COVID-19 vaccines made by the US and UK in a televised speech today.

“If the US and Pfizer can make vaccines, they should use it themselves to prevent so many of their deaths,” Ali Khamenei said.

The regime’s Supreme Leader called these vaccines “untrustworthy” adding that the US and UK wanted to “test their vaccines on other nations”. He also endorsed the so-called “Iran made” vaccine that was supposedly tested on volunteers last week. Khamenei called this vaccine “the country’s pride”.

One of Iran’s longest-serving political prisoners Gholam Hossein Kalbi started the 21st year of his life imprisonment sentence in Sheiban Prison of Ahvaz.

The authorities have not granted him any prison leave in the past 20 years, despite his serious medical issues that require treatment.

Gholam Hossein Kalbi was arrested in the city Dezful in January 2001 for being a member of the People’s Mojahedin Organization of Iran (PMOI/MEK).

#Iranian labor activists Alireza Saghafi & Haleh Safarzadeh were summoned to a Karaj Court Branch to start serving their sentences. Last year, the Revolutionary Court of Karaj sentenced them each to 1 year in prison. The verdicts were upheld upon appeal. #freepoliticalprisoners pic.twitter.com/9urAuX5BJR

Modern Diplomacy: The Army of the Hungry, the potent force of change in Iran

The wall of mistrust between the people and the rulers of Iran is growing ever higher. Contributing factors to this widening gap are too many to mention, but they include: State embezzlement, bribery, social unemployment, unbridled inflation, the display of the luxurious lives of the elites, and most importantly, the dissolution of the middle class, along with ever-increasing poverty.

The “Army of the Hungry” stands ready to revolt at a moment’s notice.

On Monday, the Iranian regime seized a South Korean-flagged tanker in the Strait of Hormuz. Although authorities attempted to explain the incident as involving illegal pollution of Iranian waters, the regime quickly came under suspicion for trying to use the tanker and its crew as bargaining chips in scheduled discussions with a South Korean envoy regarding the potential release of seven billion dollars in Iranian assets that remain frozen because of potential U.S. sanctions.

“MEK is determined to sacrifice everything for people” – Resistance Units

“MEK is determined to sacrifice everything for people” Resistance Units 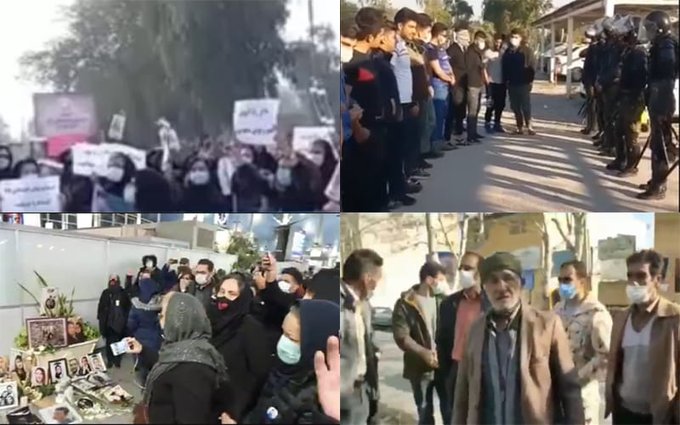 On January 7, Iranian citizens from different walks of life held rallies and strikes to achieve their inherent rights. During their protests, the people openly blamed the regime’s profiteering and plundering policies, which bring more poverty and misery for the people.

Previous articleCoronavirus Disaster in Iran: The Staggering Number of Deaths in 478 Cities Had Exceeded 198,900
Next articleBy Banning Import of COVID-19 Vaccine, Khamenei Confirms His Intention of Killing Iran’s People