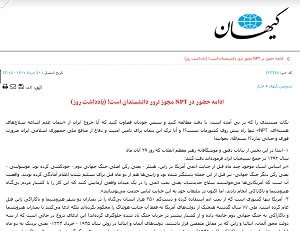 In a column in the Kayhan newspaper that run on June 10, its editor-in-chief Hossein Shariatmadari called on the regime in Iran to withdraw from the IAEA’s Nuclear Non-Proliferation Treaty.

Shariatmadari wrote: “Iran’s withdrawal from the Nuclear Non-Proliferation Treaty (NPT) is also foreseen in the text of this treaty and is mentioned as a legal right of the member states. Paragraph 1 of Article 10 of the NPT states that “if any party to the treaty determines that extraordinary events relating to the subject matter of the treaty have endangered the supreme interests of their country, they shall have the right to withdraw from the treaty to exercise their national sovereignty.”

“The question now is whether the assassination of scientists, destruction and explosion in the nuclear facilities of the Islamic Iran, where the enemy explicitly (rudely and maliciously) emphasizes the use of IAEA inspectors in committing these crimes, aren’t these issues listed among our country’s highest interests?,” Kayhan concluded. As protests and uprisings of various segments of the Iranian population have spread and entered a new phase, the clerical regime has now resorted to a new law to encourage its security forces to withstand the social pressure while intimidating the people who fight back.

On Friday, June 10, the state-run ‘Young Reporters Club‘ website, reported that the Raisi administration has submitted a bill to the regime’s parliament to amend the law on the use of weapons that aims to protect law enforcement against any potential litigation in light of shooting and killing citizens.

The draft amendment to the law has recently been put on the agenda of the parliament’s public session. This law, called “the use of weapons by officers of the armed forces in urgent cases”, was passed more than 20 years ago in January 1995.

According to the state-run Etemad Online, the bill which is due to be debated in parliament in the coming weeks has changed the term “officers of the armed forces” to “armed officers” in the title of the law which practically enables every individual that deems to protect that state use weapons against “threats” and be protected by the regime’s law.

According to the government’s draft, if “individuals who are armed by the legal authorities to protect themselves” commit a crime, they will not be punished in accordance with the Islamic Penal Code. Also, in cases where their use of weapons is considered a “legitimate self-defense”, the offender who kills an individual will be relieved of any ‘Dieh’ (Arabic for blood money’, a wergild someone has to pay the victim’s family).

It is worth noting that security forces in Iran have always enjoyed impunity and they crack down on protestors or “threats” wherever their security or the state’s stability is jeopardized. But following an upward trend across Iran where citizens are attacking security forces or showing resistance while being attacked, the clerical regime wants to openly convey the message that those loyal to the state are the most protected. 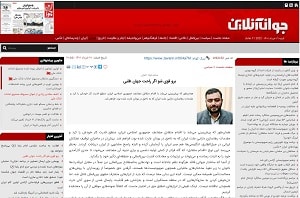 Emboldened by a Greek court decision to eventually release a seized ship that belongs to the regime in Iran, a website which is run by the IRGC argued that Tehran shall henceforth make aggression a systemic approach to international affairs.

“As expected, the countermeasure of the Islamic Republic of Iran, the ‘logic of power’ worked out and now preparations have been made for the release of the property of the Iranian people, which had been unjustly looted in Greece,” the state-run Javan Online wrote on June 10. “In the past, in the case of the seizure of an Iranian oil tanker in Gibraltar, the British also tested Iran’s patience and, of course, received a similar response from Iran. It seems that this kind of “countermeasure”, which sometimes goes beyond the initial action of the enemy and is exceedingly punishing, has proved to some extent its effectiveness and can affect the arrangements and equations of one’s international and regional power.”

Threatening the international community, the Javan Online author concluded: “Look at the oil market. If we are not allowed to sell oil, then you may not be able to buy oil from your regional servants either.” Due to skyrocketing inflation and the recent rise in the prices of goods and services across Iran, housing prices have also risen. As a result, this has further increased the severity of homelessness. A video circulating on social media shows a family who has lost everything and is now living on the streets behind a public toilet.

The reporter in the video said, “We have confronted a family, who has been thrown out of their home due to the lack of money. All their property is now on the street. A woman sitting in a tent with unpleasantness said: ‘At nights it is very cold here. We are freezing. We are living behind this toilet. I’m a weak and sick woman. Iranian authorities paraded seven men in the streets of Tehran as a way to publicly degrade and humiliate them today. They were accused of confronting and attacking the state security forces. In a humiliating manner, the police officers paraded the men in the village of Morteza Gerd where they live.

The state-run Tabnak website reported today that seven ‘thugs’ who attacked police officers during a clash this week in the Morteza Gerd neighborhood and wounded one of them with a machete; were paraded this morning, Thursday, June 10, with the presence of Hossein Rahimi, the police commander of the capital, in the area.

Sargol Akbari Viciously Murdered by Blows of an Iron Hammer A man killed his wife with the blows of an iron hammer in Sanandaj, the capital of the Iranian Kurdistan Province. The young woman, Sargol Akbari, was 42 and the mother of three children. Sargol Akbari did not survive when her drug-addicted husband, Erfan Rashidi, hit her head and body with an iron hammer on Wednesday, June 8, 2022, at 7:30 PM. The murderer is presently at large.

Sargol Akbari and her family lived in the Hassanabad neighborhood of Sanandaj. She had been battered by her husband many times before.

Stockholm, June 10, 2022: The 2nd Day of the Protest Rally by the MEK Supporters Against the Mullahs’ Regime and MOIS Agents

Stockholm, June 10, 2022: According to the statement issued by the Secretariat of the National Council of Resistance of Iran (NCRI), the protest rally of freedom-loving Iranians and supporters of the People’s Mojahedin Organization of Iran (PMOI/MEK) against the mercenaries of the Ministry of Intelligence of the mullahs’ regime (MOIS) continued on Friday, June 10.

June 9, 2022—Vienna, Austria: Freedom-loving Iranians, supporters of the People’s Mojahedin Organization of Iran (PMOI/MEK), demonstrated against the nuclear program of the mullahs’ regime for the fourth day in a row.