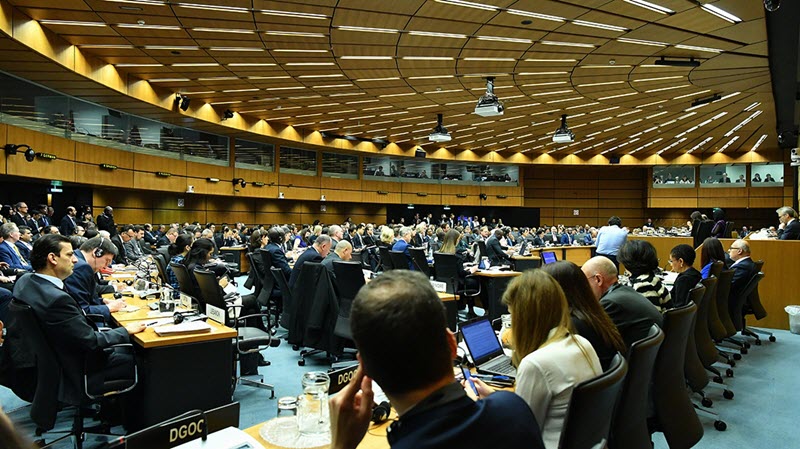 Verification and monitoring of Iran’s nuclear activity was discussed by the U.S. Mission to International organizations in Vienna at the IAEA Board of Governors Meeting earlier this week.

The U.S. said that the IAEA can depend on the United States for its full support regarding the mandate in Iran.

Ambassador Jackie Wolcott said in a statement that the United States’ reasons for ending its participation in the JCPoA were made very clear at the time and reiterated that the same concerns are still applicable today. She said that Iran’s attitude towards the nuclear agreement is vital and that the regime must stop its destabilisation of the region.

Wolcott said that a more comprehensive deal must be negotiated.

“President Trump has made clear that we look forward to concluding a comprehensive agreement with Iran that addresses the totality of our concerns, and fully reintegrates Iran politically and economically into the international community.”

By pushing for a more thorough and watertight agreement, Wolcott said that Iran is being given the opportunity to renew its relations with the international community in a more normalised way and a chance for economic sanctions to be lifted. She said that this would allow Iran to have a number of opportunities open up such as support in remodelling the Iranian economy so that it can reintegrate into the international economic system. This would also allow Iran to have full commercial and diplomatic relationships with the rest of the world.

To achieve this, the United States insists that Iran must change its behaviour and prove that it is going to ensure that its nuclear program will only be used for peaceful purposes. This means that Iran must allow verification, effective verification, to take place otherwise trust cannot be gained.

“Absent assurances of effective verification, there is no chance for diplomacy to succeed, so it is up to all of us – at the IAEA, in Iran, and in the rest of the international community – to preserve the integrity and effectiveness of IAEA monitoring.”

With regards to the huge nuclear archive of files about its previous nuclear activities, the Ambassador said that Iran has a responsibility to truthfully explain the details behind it otherwise there is no way forward. Wolcott said that the fact Iran hid this archive shows that its intentions with regards to the JCPoA were not pure and is proof that Iran has been trying to keep all nuclear avenues open, despite its claims to the contrary.

The Ambassador emphasised that these issues are not a way to score political points, but are issues that must be addressed in order to move towards a more positive place of trust. She also pointed out that Iran will not be given any concessions and that it must uphold its commitments and obligations in full. She therefore called on Iran to proactively cooperate with the IAEA without further delay.
Although it was not the topic of discussion, Wolcott brought up the controversy surrounding claims that the U.S. is violating UN Security Council Resolution 2231 and the UN Charter by reimposing sanctions. She said: “This is simply not the case. The United States has ceased its participation in the JCPOA. We are out of the deal, not in violation of it. There is no legal requirement in UN Security Council Resolution 2231 that would require continued U.S. participation or support of the JCPOA, which is a non-binding political arrangement among its participants.”