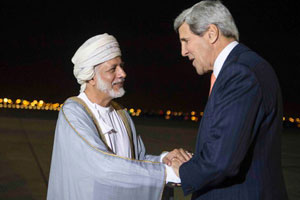 The United States, the European Union and the Iranian regime began an unscheduled second day of nuclear talks on Monday over disagreements blocking a final deal from being reached regarding the curbing of the Tehran regime’s nuclear activities, according to U.S. and Iranian officials.

U.S. President Barack Obama told CBS Television on Sunday there was still ‘a big gap’ between Iran and Western powers.

A final step would involve the Iranian regime providing “verifiable, lock- tight assurances that they can’t develop a nuclear weapon”, Obama said, adding: “There’s still a big gap. We may not be able to get there.”

In the CBS interview, Obama declined to comment on a report that he had sent a letter to Iran’s Supreme Leader, Ayatollah Ali Khamenei, about combating the Islamic State militant group.

An editorial on Khamenei’s website on Sunday said Obama had written three letters in total to Khamenei – in 2009, in 2012 and “about a month ago”, adding: “In fact, the U.S. has always reached out to Iran when faced with an impasse, and Obama’s latest letter is a direct link to foreign policy dead-ends, especially those involving Iran somehow.”

“It is outrageous that, while the cries of moderate Syrian forces for greater U.S. assistance fall on deaf ears in the White House, President Obama is apparently urging Ayatollah Khamenei to join the fight against ISIS,” GOP Sens. John McCain of Arizona and Lindsey Graham of South Carolina said in a joint statement.

They warned: “The consequences of this ill-conceived bargain would destroy the Syrians’ last, best chance to live in freedom from the brutal Assad regime.”

“I can tell you that it is causing real problems with our Sunni Arab League partners in the fight against ISIS,” Rogers said Friday on MSNBC. “It’s really concerning.”