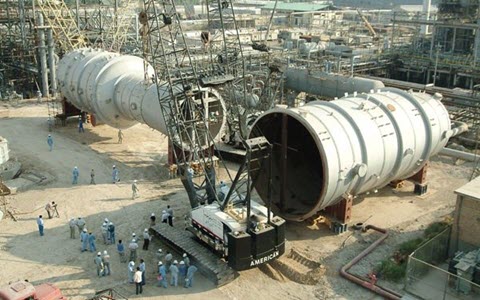 NCRI – The Persian Gulf Oil Refinery workers warned against the non-payment of workers’ salaries and threatened to demolish the sites at the refinery.

Part of this announcement states:

“Unfortunately, most of the several thousand workers in the refineries are poor and poorly educated rural people who are unaware of their primary rights.”

“After the arrival of the Islamic Revolutionary Guards Corps (IRGC) in oil and gas fields and the country’s infrastructure, with the implicit mandate of Iran regime’s Supreme Leader, Ali Khamenei, for building a resistive economy during the former president Ahmadinejad’s era, the corruption center and economic leech house in the country, namely the headquarters of Khatam, was established. “

“It is interesting to note this ridiculous, and of course, disastrous point about the activity of the Khatam headquarters that it takes the role of Iran’s major economic broker by taking projects from the government and immediately transferring them to the largely inexperienced private sector and new emerging unskilled retail contractors, appears to be as a major dealership in Iranian economy, and engages secretly in circumvention and plundering of the country’s billion dollars budget.”

“Unfortunately, during the first six months of this year, the situation has been catastrophic for the poor strata of the society, which, like most non-oil companies and factories, most of the oil section force have received only one-and-a-half percent of their salaries in the past six months.”

“Given the hardship and life-threatening dangers of this type of activity in the southern regions, with unbearable heat and sultry weather in the outskirts of the city, in a closed camp environment with very limited facilities, is our share of daily oil and gas production one month salary for every six months of work?”

“Where did your conscience and honesty go, that you do not pay at least the share of the workers that through their activities you are able to produce and sell oil and gas?!”
“It is ironic that we received even the one or one-and-half percent salary after strike and shutting down the work.”

“Unfortunately, at the beginning of October, there is such a lack of funds that the Star Oil Refinery companies, with a few thousand recruits, could not provide gasoline for two days for the activities of transportation cargo and machinery including cranes.”

Our forces in Rajai, Abad-e-Ra’ahan and South Tehran companies of the Star Oil Refinery have begun a peaceful strike over the past few days. Today, when our colleagues visited the company’s office, they were told the bitter words that there is no money, if you cannot tolerate, just go away! Something should be said.”

“Most companies of the Refinery have closed down or half-closed due to the lack of funding.”

“We, the workers of the Persian Gulf Star Oil Refinery, announce that in order to end the situation and endure this horrible summer without a salary, we will continue our protests peacefully only a week before October 5, and if our objections are not fulfilled, with apology to the honorable nation of Iran, we will break down and destroy the sites in the refinery.”

“Surely black will take no other hue and Khatam headquarters is directly responsible for the damage.”

Previous articleIran: The Situation of Arrested Christian Couple Is Still Unclear
Next articleIran: %40 of Unemployed in Iran Have a University Degree