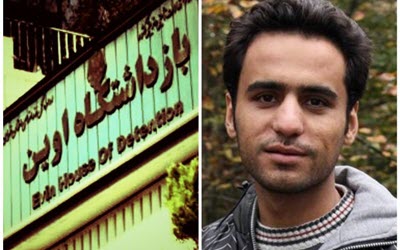 NCRI – According to reports by Farsi-language websites, following nine days of being on a hunger strike, Behnam Mousivand, the political prisoner in ward 8 of Evin Prison, has now gone on a dry hunger strike.

From Wednesday September 14, he has even refused to take water. This political prisoner is suffering from some type of intestinal disease and his health condition will become critical in case he remains on hunger strike.

According to reports, on the seventh day of his hunger strike, Behnam Mousivand had refused to take medications as well.

He writes in a letter in this regard:”On the seventh day of my hunger strike, I’ve decided to go on a medication strike including two of my specialized drugs, namely Depaltin-500 and Alanta-700.”

Mousivand continues:”In response to my sister’s remarks that political prisoners should legally be separated from non-political ones, Mr. Hajiloo, the prosecutor overseeing the prison, has said “which law are you talking about?” That’s why I’m insisting on the legitimacy of my demand.”

In September 5, Behnam Mousivand was beaten at night by a number of ruffians, supported by prison officials, in ward 8 of the Evin Prison. Following that incident and in protest against prison’s nonconformity to law on categorization of crimes, Mousivand has gone on a hunger strike from Tuesday September 6.