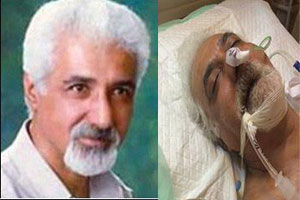 NCRI – An Iranian political prisoner who is in critical physical condition because of denial of medical treatment went on a hunger strike on Friday.

Political prisoner Mr. Mashallah Haeri, 63, who is kept in Gohardasht Prison in the city of Karaj had suffered several bleedings in his ears and nose. H was transferred to the hospital unconscious.

He has been subjected to psychological and physical torture including denial of receiving medical care for his support for the Iranian opposition movement, the People’s Mojahedin Organization of Iran (PMOI/MEK).

Mr Mashallah Haeri,a political prisoners of the 1980s, was condemned to 15 years in prison in December 2009 for visiting his relatives in Camp Ashraf, Iraq.

Due to the brutal tortures and the deplorable prison conditions, he now suffers from acute heart and respiratory ailments and has suffered several heart attacks.

The last time he was taken to the hospital, he was not allowed to remain there for the completion of his treatment and was returned back to prison. This cruel measure caused the deterioration of his condition.

Additionally, Mr. Haeri’s daughter, Negar, who has been arrested since July is being kept in Qarchak Prison in the town of Varamin without any indictment.

This anti-human measure by the Iranian regime has been protested and condemned by the international human rights organizations on numerous occasions.