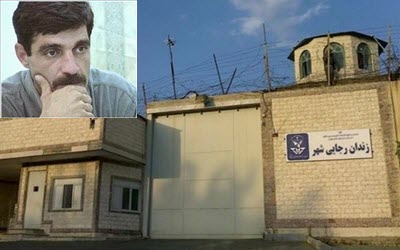 Iranian political prisoner Saeed Masouri has written to the current session of the United Nations Human Rights Council in Geneva to expose recent further aggressions against political prisoners in Iran by the mullahs’ regime following the publication of an earlier joint letter to the council by political prisoners urging it to extend the mandate of its investigator on human rights abuses in Iran.

Mr. Masouri, who is imprisoned in Iran’s Gohardasht Prison in the city of Karaj, north-west of Tehran, over his affiliation with the main Iranian opposition group People’s Mojahedin Organization of Iran (PMOI, or MEK), protested the recent pressures and harassment of his fellow inmates after the joint letter signed by 40 political prisoners earlier this month was sent to the council in support of extending the mandate of UN Special Rapporteur on the situation of human rights in Iran, Ahmed Shaheed.

The political prisoners said that the mullahs’ regime had failed to deceive or bribe Mr. Shaheed whose reports they said have had tangible effects in the regime’s prisons.

They added that the regime’s judiciary officials have offered political prisoners clemency if they declare that Mr. Shaheed’s reports are bogus.

After the political prisoners’ letter was published, the regime’s henchmen have stepped up pressure on the signatories. Three of the signatories – Iraj Hatami, Fareed Azmoudeh and Behzad Tarahomi – have since been taken to the warden’s office and threatened that they would be transferred to the ordinary prisoners’ ward if they continued to sign on to joint letters against the regime.

Mr. Masouri, who was among the signatories of the original joint letter, has subsequently written to the Human Rights Council, UN Secretary Ban Ki-moon and Amnesty International warning that the lives of some of the political prisoners are in danger.

Below is the text of his letter:

As a prisoner who each day is under horrific pressures, aggressions and attacks against condemned human beings in prison, I declare that the accomplices of [the Iranian regime’s president Hassan] Rouhani are determined to murder and annihilate a number of prisoners, including three of my cellmates, by announcing their charges as “classified.” The reason is nothing but an inhumane hatred. They are provoking hired prisoners to attack others with knives and other such weapons to serve as a lesson to others. As usually, they will be describing such incidents as ordinary fights between prisoners, heart attacks, brain strokes, swallowing a high number of pills and … The real issue is that these prisoners had only supported the Human Rights Council and its Special Rapporteur, Dr. Ahmed Shaheed. Otherwise, at a time when it has been five years since they have been behind bars, there are no longer any other charges.

Therefore, as one of their cellmates, we strongly warn about the conspiracies set for these prisoners (Misters Iraj Hatami, Fareed Azmoudeh and Behzad Tarahomi) and that their lives are truly in danger. The number one party responsible for any possible occurrence is none other than the judiciary and the Gohardasht (Rajai Shahr) Prison warden. The reason is that on 6 December 2015 they hired inmates to attack the abovementioned men, threatened them with various non-firearm weapons and even burned their faces and heads with cigarettes so they would no longer raise any protests regarding the unfair conditions in court and prison.

I am announcing beforehand that if my cellmates and I are charged with “classified” accusations, or rioting and anarchy in prison, we are merely protesting injustice measures and extortions carried out against prisoners, as we are left without anyone to turn to and seek help. Now it is the turn of these prisoners. Therefore, I am urgently calling on all human rights organizations, especially the UN Human Rights Council, to not remain silent in the face of this possible catastrophe, or else this will be the fate of us and all other prisoners.