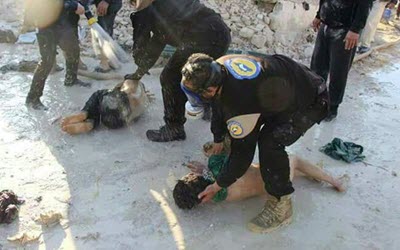 The following is part of the letter written by the political prisoners of Gohardasht Prison:

“We condemn the implementation of chemical weapons which has been carried out by the illegitimate government of Bashar Assad backed by the Iran regime and the Russian government against the people of Khan Shaykhun in Syria.

We the political prisoners of Gohardasht (Rajai Shahr) Prison also condemn the chemical attacks launched by the criminal and murderous dictatorship of Syria. The innocent Syrians, especially the defenseless women and children are being treated with extreme cruelty and oppression for 6 years.”

The political prisoners praised the courageous resistance of the people while conveying condolences to the people and the Free Syrian Army. They stressed that these crimes would not have been committed, if the international community had taken strong and effective measure against the chemical crimes carried out by Assad and his supporters in 2013.

At the end, the political prisoners called on the UN and the Security Council to immediately and strongly prosecute those committing the brutal crimes against the humanity.

Previous articleThe Chairman of the Gulf Research Center: America’s Appeasement Policy Ends in Yemen
Next articleIncapacitating Syrian Dictator’s War Machine  Should Be Completed With Expulsion of Iranian Regime, the IRGC and Mercenaries From Syria, Iraq and Yemen