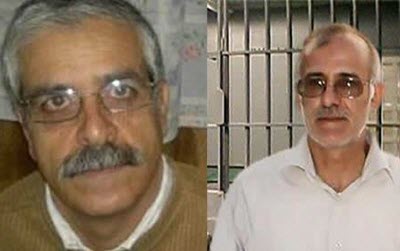 NCRI – In a letter dated December 18, political prisoners in Gohardasht prison in Karaj, Ali Mo’ezi and Abolghassem Fouladvand, relatives of the MEK members, praise the Free Syrian Army combatants and their resistance against the crimes of Bashar Assad and Iranian regime.

The following is the political prisoners’ letter:

“O, Aleppo, we praise your resistance. You the people of Aleppo and the combatants resisted to the last breath without water, bread, food, medicine and medical care or hospitals against Russian’s heavy bombing and airstrikes and brutal attacks by Assad forces and Iranian regime’s mercenaries and sectarian militias.”

“The cry of the innocence and oppressed people (of Aleppo) and appeal of the hungry women and children for help did not receive any response and the mercenaries of anti-human regime in Iran occupied Aleppo under the umbrella of heavy bombing and airstrikes by Russia. After the occupation, they viciously started killing and executing and intimidating the residents. This is a war crime (and a crime against humanity) that provokes outrage, anger and shame of every human being.”

“The hearts of Iranian people and Syrian people and combatants are together and one heart because we have a common pain and both nations have suffered lifelong oppression of dictatorships. We have no doubt that what happened in Aleppo will be ruined on the head of Assad regime and this is a historic ambuscade that will finish both regimes in Iran and Syria altogether.”

“The time and opportunities for both regimes of Iran and Syria have ended and the revolution is alive in both countries, and soon people of both nations with the storm of revolution and popular developments will get rid of both evil regimes.”

Previous articleCollecting Votes, Under the Pretext of ‘Charter of Citizens Rights,’ by Iran Regime President
Next articleIran Regime’s Goal of Publishing Qassem Soleimani’s Photo in Aleppo