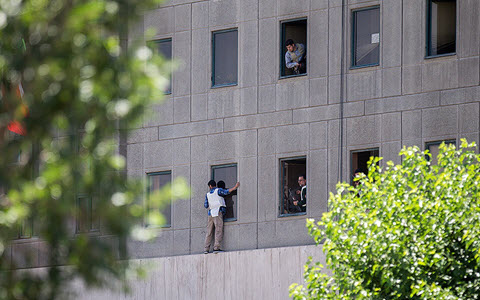 Following the terrorist attacks targeting the parliament and Khomeini’s tomb, as if a heavenly gift has come for Iran’s criminal rulers, to relate everything and anything to this, to provide a pretext to legitimize future criminal measures in the past, present and future.

State TV is continuously using this as an excuse to justify previous and future killings.

These measures that lead to the death and injury of innocent people were planned by the regime itself to bring an end to the current atmosphere in Iran where everyone is questioning the 1980s executions. There is a threat that:

– The regime intends to use this as a pretext to justify their crimes in the 1980s and the 1988 massacre,

– They intend to crackdown any demand for freedom, and those protesting for their most investment, under the pretext of such terrorist measures,

– All the questions in today’s society and amongst the youth will be placed in the shadows of security issues, and they will refuse to answer,

– Increasing the number of executions and with a huge lie apparently being ISIS (their own ally in Syria and Iraq) has officially accepted responsibility; and kill a number of our Sunni brothers.

Therefore, we the political prisoners of Evin, Gohardasht, Fashfaviye in Greater Tehran, Zahedan and Ahvaz prisons in advance warn Amnesty International, the UN Human Rights Council and all human rights organizations about the threats facing a group of prisoners and their execution under bogus reasons.

Previous articleIran Regime’s Fear of Bipartisan Sanctions in the U.S. Senate
Next articlePolitical Prisoners’ Letter to U.N. Special Rapporteur on the Situation of Human Rights in Iran