Iran: Political Prisoners Write a Letter in Support of People in Syria and Aleppo 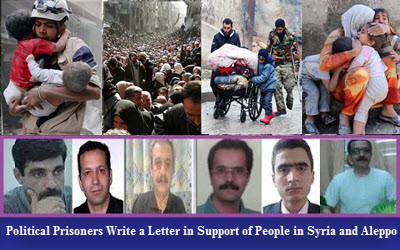 NCRI –  group of political prisoners in Karaj – Western Tehran have in a letter condemned the crimes committed by the Iranian regime and its mercenaries in Syria while expressing their solidarity with people in Aleppo.

Part of the letter is as follows:

Having spent years of our lives in prison, we prisoners are quite familiar with the nature of turning the truth upside down by regime’s media, but you could easily find out about the crimes committed in Aleppo even amidst the regime’s distorted and censored news.

From inside the prison, we tell the hero of a city, Aleppo, which heroically sustained 15 months of bombing, and to each and every one of our unseen dearest women, men and children of Aleppo: your endurance, fight and resistance despite all its pain and suffering, was a new model for ‘determination to take control of one’s destiny’ which changed the regional and global balance of power, with its signs already emerging and its unbelievable fruits sure to come.

Although we are in captivity and subject to the retaliation by those same people who are killing you, and, ironically, despite being held captive in our own home Iran for the same reason you have been slaughtered at yours, but please accept our sympathy and know that we are standing by your side. The interventions by the so-called Iranian leaders are condemned as war crimes by not only any noble, liberal Iranian, but also by any ‘global citizen’.

Looking back at the protests by students and youth in the United States during the Vietnam war as well as the protests held by French students and people against France’s intervention in Algeria, and together with youth in Ahwaz and all the enlightened and courageous Iranian students, we yell from the depths of prison: we are all with you, Aleppo.