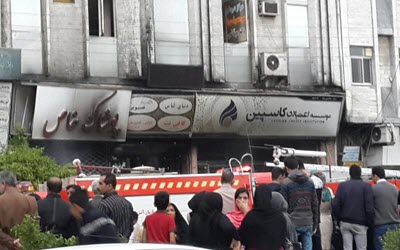 NCRI – On Tuesday April 25, furious people of the city of Behshar – Northern Iran, whom their savings were plundered by a state – owned company called Caspian, set a branch of this company on fire.

This company which has eight sub-companies under the guise of ‘cooperative entities’, had collected small capitals of 2 million people in various cities and looted it all.One of these entities called ‘Fereshtegan’ alone, has plundered around 4 Billion Tomans (more than one Billion and 66 Million dollars).

All these companies belong to regime’s authorities and in order to concentrate power. Their foundation and activities are all sponsored by government institutions. Caspian Company is also one of them which was founded under the authorization of Central Bank, and now is refusing to turn back the people’s savings, and to this date, the complaint of these poor plundered people has received no response from the regime’s judicial system.

Previous articleStruan Stevenson: Iran Regime Is Very Weak and Rotten, Teetering on the Edge of a Cliff
Next articleClash of Iran Regime’s Presidential Candidates Over Unemployment: Who’s Deceiving People?