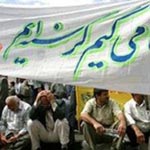 NCRI – Protesting workers have occupied a milk factory in the city of Shahrekord (western Iran) to demand their unpaid wages. The milk factory employers have not been paid for the last six months.

In the protest that was held on January 1, the workers announced that until full reimbursement of their unpaid salaries, they will continue occupying the factory.

The protest ended peacefully when the employer paid each worker 300000 Tomans and promised to pay two months worth of salaries later on this week.