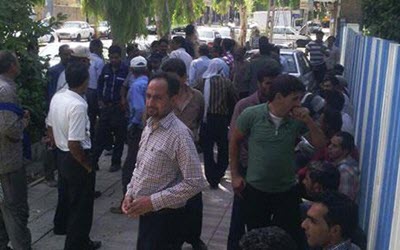 NCRI – Reports from Iran of some of the latest anti-regime protests:

University students protest in Yasuj
Yasuj (central Iran), May 17 – A group of students of Yasuj University held a sit-in after discovering cockroaches in the food of female students. The protesters chanted: “Incompetent manager! Resign! Resign!”

Merchants protest in Piranshahr
Piranshahr (north-west Iran), May 16 – Merchants of the Piranshahr Bazaar held a protest against recent repressive measures by the mullahs’ regime aimed at blocking the sale of imported clothes in border areas. These preventive measures have cut the sole subsistence of the merchants, creating a difficult situation for them.

Housing applicants protest in Karaj
Karaj (north-west of Tehran), May 17 – Applicants of the Mehr Housing Project in Pardis lodged a protest, demanding housing assignments. The rally was the largest recent gathering by housing applicants in this region.