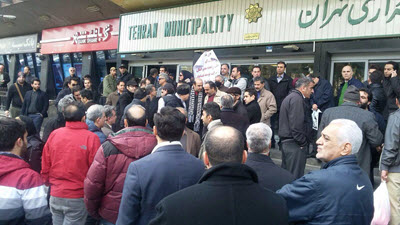 NCRI – On Monday September 19, a group of residents and shopkeepers of district 5 of Tehran staged a protest gathering in front of the City Hall to protest against issuing permits for construction of commercial complexes inside residential fabrics of central Janat Abad neighborhood.

The demonstrators said that building a 17-storey commercial complex with an area of approximately 2000 meters in the narrow alley of Bustan which has a width of 12 meters will increase the traffic in this neighborhood more than ever and will create many problems in the future.

It should be noted that construction of large buildings in Tehran is growing rapidly and municipalities also support it because it is very lucrative for them.

Previous articleGeneva: The 1988 Massacre of Political Prisoners in Iran and the role of the International Community
Next articleIran: Public execution at sports stadium