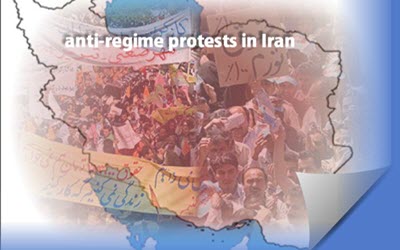 NCRI - The following are a selection of news about recent anti-regime protests in Iran:

The furniture sellers of Yaft-Abad, in particular the sellers of Omid Mall, shut down their business, rallied in the streets and protested against the severe recession, declining revenues and tax extortions in the Guild. The policies of the mullahs' regime have driven these sellers to the verge of bankruptcy.

A group of market sellers who had witnessed this violent incident, clashed with regime forces and the regime's police forces left the market in fear of the protest spreading.

In January 2015, a huge "fraud" worth $34.3 billion came to light in the company which is believed to have manipulated its shares. Many people who had invested in the company went bankrupt soon after.

Padideh Shandiz is reported to have had a third share in Iranian airports advertisements, as well as paying 5.1% of the state-broadcaster IRIB's income from advertisements.