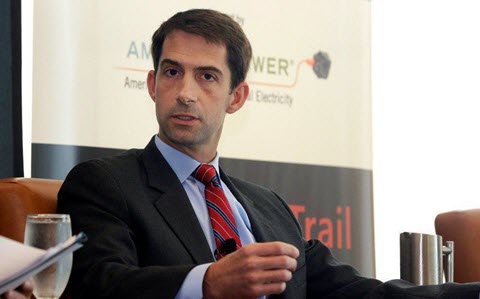 NCRI - Senator Tom Cotton (R-Arkansas) released the following statement on the protests against the Iranian regime in the city of Mashhad on Thursday, 28 December 2017:

"Even after the billions in sanctions relief they secured through the nuclear deal, the ayatollahs still can't provide for the basic needs of their own people-perhaps because they've funneled so much of that money into their campaign of regional aggression in Syria, Lebanon, Iraq, and Yemen. The protests in Mashhad show that a regime driven by such a hateful ideology cannot maintain broad popular support forever, and we should support the Iranian people who are willing to risk their lives to speak out against it."

On Thursday a large number of protesters took to the streets in the cities of Mashhad, Neyshabur, Kashmar and Birjand in northeast Iran, protesting unemployment, poverty and skyrocketing prices. Protesters were also seen chanting, "Death to Rouhani" and "Death to the Dictator," in reference to the regime's president and Supreme Leader Ali Khamenei, respectively.

In solidarity with the people of Mashhad uprising, residents of Kermanshah in western Iran on Friday rushed to the streets and chanted slogans “death to the dictator”, “do not be afraid, do not be afraid, we are all together”, “Death to Rouhani”, “political prisoners should be freed”.

Protesters chanted, "The nation is poor, the Leader is like God”, "Neither Gaza, Nor Lebanon, My Life For Iran", "Bread; Job; Freedom", "No to High Prices".