3 Protests in Iran Within 24 Hours 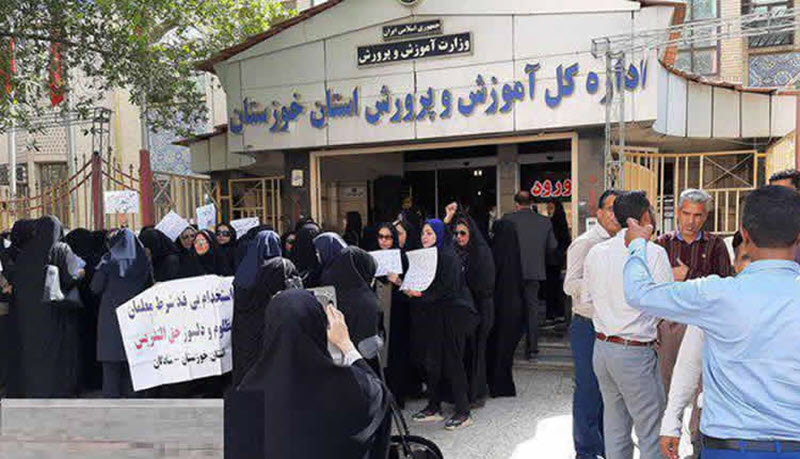 on Tuesday, July 23, 2019, a group of contract teachers from the city of Shadegan, in Iran’s south-western Khuzestan province, rallied outside the governor's office.

Protests by contract teachers in Shadegan

According to the state-run ILNA news agency, on Tuesday, July 23, 2019, a group of contract teachers from the city of Shadegan, in Iran’s south-western Khuzestan province, rallied outside the governor's office.

The protesters demanded that their job status be turned into official employees of the Ministry of Education. Contract teachers are not considered government employees and have no job security.

On Tuesday, relatives of road accident victims and a group of Iranian citizens from Larestan, in Iran’s southern Fars Province, gathered in front of the building of the General Administration of Road and Urban Development Organization in Larestan to protest against the condition of the city's roads.

Following repeated road accidents on the Lar-Jahrom road in the south of Fars province and the death of 16 people in the last 40 days, on Tuesday morning, a group of protesters gathered in front of General Administration of the Road and Urban Development Organization and the governor’s office in Larestan. The demonstrators protested over the lack of progress in expanding the lanes of the transitional road and the disinterest of government officials.

Protests by metro employees in Tehran

On Monday, a group of Tehran metro employees gathered in the metro area of the city to protest against changes in their job status.

The protesters demanded the resignation of the director of the metro, calling him unqualified for the job.