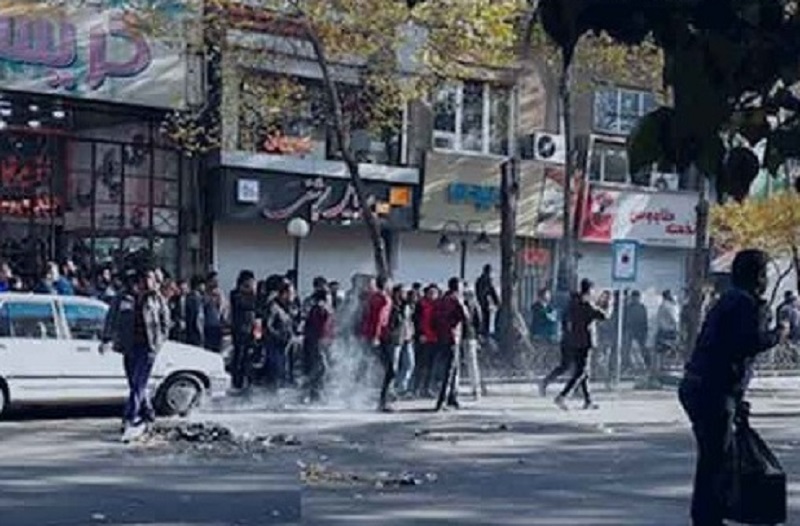 Written by Mahmoud Hakamian on 30 November 2019.

In the last two weeks of November, Iran faced the most widespread protests in the past 40 years, which is still ongoing. This uprising has many lessons to be learned. It shed light on many issues including the questions and doubts about the situation in Iran, the Iranian regime’s status, desires and demands of Iranian people, and the roadmap for real change in Iran.

A lesson learned is that the protesters were targeting the entirety of the mullahs’ regime and their demand is the overthrow of the clerical regime and regime change. The slogans of people emphasized their demand; “death to Khamenei”, “Death to Rouhani”, and “death to the dictator”. Torching the Revolutionary Guard Corps (IRGC) owned banks and centers were other indications of people’s hatred towards the whole system and its security forces.

Another lesson was that the change will not come from within the regime, and there are no moderates inside the regime. The mullah’s regime is engulfed with the crisis of overthrow and both factions of the regime, meaning regime’s President Hassan Rouhani the leader of the so-called reformists, and Supreme Leader Ali Khamenei are both in this sinking boat, and survival of the regime is their main strategic goal.

Rouhani, like Khamenei by calling the protesters “thugs” and “hooligans” asked for capital punishment for the protesters, and emphasized the unity of the regime on this issue.

“We must protect our security and brotherhood and our unity,”  Rouhani said on November 17, 2019

“The enemies had ambitions on their mind, and they thought that if something happens, it would be the end of our system…in defending the system we are all united…”  Rouhani said on November 27, 2019, in a speech in the city of Tabriz.

For years there was a notion that the change will come from within the regime and there are reformists inside the mullahs’ regime, but the lesson learned from the recent uprising, once again, attested that the notion of having reformist inside the regime is just a mirage. The consequence of this notion was the appeasement policy of the West towards the regime. A policy that allied itself with the regime against the Iranian people under the pretext of supporting the “reformists” against the “hardliners” inside the regime.

The victims of this policy were the Iranian people, and the regime’s main opposition group the People’s Mojahedin Organization of Iran (PMOI-MEK).

To save their regime, the mullahs incited this idea, and simultaneously by demonizing the MEK as their main opposition group depicted that they have no alternative and change can only come from within the regime. To this end, the goal of the regime’s unprecedented demonization campaign against the MEK was to portray them as a terrorist organization with a cultish behavior and with no popular support in Iran. These allegations were the bases to designate the MEK as a terrorist organization by the EU and the US and for decades this was their official policy.

On April 2019, in an op-ed in The Washington Times, Tom Ridge America’s first Homeland Security secretary and governor of Pennsylvania wrote:

“When I left the U.S. Department of Homeland Security, I was approached to support the NCRI, or more specifically its main component, the People’s Mujahedeen of Iran, or MEK. At the time, MEK was listed as a Foreign Terrorist Organization. During my tenure, I met just about every morning in the Oval Office to review all terrorist threats directed at Americans and American interests. I have been part of hundreds of briefings and thousands of pages of terrorist threats. One of the reasons I decided to support the cause of the Iranian people was because the name “MEK” never appeared — not one day on one memo on one page on one allegation. The MEK has rightfully been removed from the Foreign Terrorist Organization list.”

Another lesson learned from the November uprising is that the Iranian people are not deceived by the mirage of “reformists-hardliners inside the regime” and they are seeking overthrow of the clerical regime as its entirety and their road model is the MEK’s resistance units which have been torching the symbols of the regime for the past two years. The protests first flared on November 16 because of oil prices hike, but thanks to activities of MEK’s resistance units it soon turned into an uprising demanding regime change. This compelled the regime and its senior officials to acknowledge the fact that MEK is leading the protests. The regime which had invested heavily in its demonization campaign to portray that MEK has no popular support now had to acknowledge that the uprising is organized and orchestrated by the MEK and its supporters.

In an address aired by the state television on November 17, 2019, regime’s supreme leader Ali Khamenei said “… sabotage and arson are done by thugs, not our people. The counter-revolution and Iran’s enemies have always supported sabotage and breaches of security and continue to do so…If you note you will see that in the last two days and nights all the centers of sedition have become active…the criminal MEK is continuously calling for these actions and encouraging these actions in social media and other places.”

Ali Sahamkhani, the regime’s National Security adviser blamed the MEK for the protests and claimed that some of the arrested demonstrators were from the MEK. In a closed-door meeting of regime’s parliament “Shamkhani said some the arrestees were from the MEK,” Assadollah Abbasi, spokesman of the regime’s parliament said in a press conference on November 17.

According to the state-run Fars news agency, Hossein Ashtari, Commander of the State Security Forces, said: “Our investigations indicate that instructions coming from counter-revolutionary and the MEK organization was the cause of these events. The country’s security and police institutions will identify these individuals, and God willing, they will be punished for their practices at the right time.”

On November 23, 2019, the state-run news agency IRNA reported that: "Besides Tehran, Isfahan, Tabriz, and Ahvaz, the city of Shiraz had the most extensive movement by hooligans and those linked to the MEK. Thanks to the efforts of security and law enforcement forces" and "after the arrest of the main leaders of the movement associated with the MEK" calmly returned to the city.”

In a press conference on Sunday, November 24, Ali Shamkhani, the regime’s Secretary for Supreme National Security Council said, “These people were connected to foreign governments and the Mujahedin-e-Khalq (MEK)… I believe 34 MEK members have been arrested so far. A vast network of individuals, operating not under the MEK’s name, but pursuing their line and modus operandi were also identified.”

On November 22, 2019, during Friday prayer congregations in different cities across Iran most of the speakers, who represent the supreme leader, talked about the uprising and asked the judges to execute the protesters.
Ahmad Khatami, the Friday prayer leader of Tehran, alluded to the role of the MEK in the protests and said, “They themselves had said that they had prepared three years in advance. They had trained people outside and inside the country.”

Ali Rabiei, the spokesperson of regime president Hassan Rouhani, said, “[The protesters] were targeting military and security centers… they created chaos and returned to their hideouts.”

Other Iranian officials went further and described the regime’s survival as divine intervention. “There was incredible coordination during the protests. They were just waiting for a spark to destroy the entire country. Further information will be revealed after the arrested confess,” said Salar Abnoush, a senior IRGC commander. Abnoush added, “We had seen miracles in the revolution and during the sedition, but this sedition was of a different scale… as a person who was on the ground, I believe that God saved us.”

The mullahs in Iran are very fearful because, despite the brutal crackdown, the protests have managed to continue unabated. This is an organized uprising that has become popular and that is why the regime is unable to put an end to it.

In recent days the resistance units have posted banners in different parts of the major cities in Iran. The messages on the banners reflect the intentions and aspirations of the protesters.

Pictures, Messages by the Resistance’s Leadership on the #IranProtests in Tehran, Tabriz, Orumiyeh, Kerman https://t.co/o5skMCxYpJ