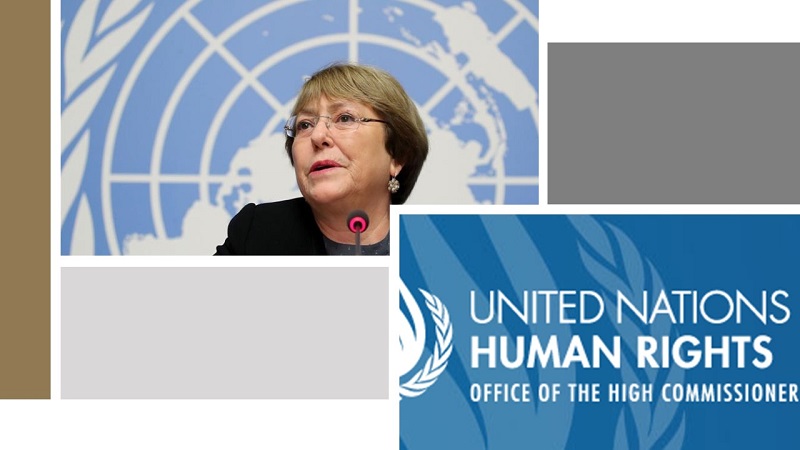 The Iranian regime's security forces were “shooting to kill” in their deadly crackdown on the Iran protests in recent weeks, according to credible video footage, the United Nations human rights chief said Friday, December 6, 2019

Written by Mansoureh Galestan on 07 December 2019.

The Iranian regime's security forces were “shooting to kill” in their deadly crackdown on the Iran protests in recent weeks, according to credible video footage, the United Nations human rights chief said Friday, December 6, 2019.

As more information gradually filters out of Iran in the wake of the recent protests, the UN High Commissioner for Human Rights Michelle Bachelet on Friday expressed alarm at the continuing lack of transparency about casualties and the treatment of thousands of detainees, as well as continuing arrests reported to be taking place across the country.

The regime's security forces responded to the protests with water cannon, tear gas, batons, and in some cases live ammunition against unarmed demonstrators who posed no imminent threat of death or serious injury, the High Commissioner pointed out. According to reports, members of the Basij militia and the Islamic Revolutionary Guard Corps (IRGC) were involved in shooting protestors.

“Verified video footage indicates severe violence was used against protesters, including armed members of security forces shooting from the roof of a justice department building in one city, and from helicopters in another,” Bachelet said. “We have also received footage which appears to show security forces shooting unarmed demonstrators from behind while they were running away, and shooting others directly in the face and vital organs – in other words shooting to kill. These are clear violations of international norms and standards on the use of force, and serious violations of human rights.”

In what appears to be one of the worst incidents, which took place on November 18, the High Commissioner said her Office had received information partially corroborating reports that Iranian security forces used machine guns against protesters in Jarahi Square in Mahshahr – including against people fleeing the area and people hiding in nearby reed-beds – resulting in at least 23 people killed, and possibly many more.

As well as protestors, it is reported that bystanders in the street and people watching from their homes were also hit with bullets during the Mahshahr incident.

As more information gradually filters out of #Iran in the wake of the recent protests, @mbachelet is alarmed by the lack of transparency about casualties & the treatment of thousands of detainees + continuing arrests reported across the country 👉 https://t.co/r55UzwCDmU pic.twitter.com/NnG6tW4hf3

At least 7,000 people have reportedly been arrested in 28 of Iran’s 31 provinces since mass protests broke out on 15 November, and the High Commissioner said she is “extremely concerned about their physical treatment, violations of their right to due process, and the possibility that a significant number of them may be charged with offences that carry the death penalty, in addition to the conditions under which they are held.”

During the five days of demonstrations, which according to official Government sources involved between 120,000 and 200,000 protestors, the UN Human Rights Office has information suggesting that at least 208 people were killed, including 13 women and 12 children. There are also reports, which the UN Human Rights Office has so far been unable to verify, suggesting more than twice that number killed.

“In such circumstances, with so many reported deaths, it is essential the authorities act with far greater transparency,” Bachelet said. “They must undertake prompt, independent and impartial investigations into all violations that have taken place, including the killing of protesters and reported deaths and ill-treatment in custody. And those responsible must be held accountable. There appear to be multiple violations of the International Covenant on Civil and Political Rights, which Iran has ratified and is obliged to uphold.”

The UN Human Rights Office has received numerous reports of ill-treatment against those arrested, including with the apparent aim of extracting forced confessions, and State television has broadcast the “confessions” of some detainees alleged to be protest leaders and people affiliated with anti-government groups or foreign States. According to the deputy chief of the IRGC, those who have “openly confessed they were doing mercenary work” will face severe punishment.

“Many of the arrested protesters have not had access to a lawyer, meaning due process is not being respected,” Bachelet said. “We also have reports of severe overcrowding and harsh conditions in detention centres, which in some cities include military barracks, sports venues and schools in addition to official detention facilities.  There are also reports that individuals who were wounded or otherwise injured during the crackdown are being denied medical treatment in detention.”

She expressed concern at reports of intimidation of journalists trying to report on the situation both inside and outside the country, with family members of Iranian journalists working for news channels based outside Iran reportedly summoned and threatened with reprisals by intelligence officials.

“All in all, the picture now emerging from Iran is extremely disturbing,” Bachelet said. “I urge the authorities to immediately release from detention all protestors who have been arbitrarily deprived of their liberty, and to ensure their right to due process, including access to a lawyer of their choosing during the investigative stage. In the event of further protests, I urge the Government to respect Iranians’ right to exercise freedom of expression, peaceful assembly and association and, in addition to investigating the violations that have already occurred, to restrict the use of force to the greatest extent possible, as provided for under the relevant international norms and standards.”

The People’s Mojahedin Organization of Iran (PMOI), also known as the Mujahedin-e-Khalq (MEK), has released the names of 350 of more than 1000 protesters who were killed by the regime in the nationwide uprising that engulfed 189 cities. Several minors are among the martyrs.

At a press briefing on December 5, 2019, Brian Hook, the United States Special Representative for Iran, affirmed that the number of deaths in the recent Iran protests may have surpassed 1000.

“We have seen reports of many hundreds more killed in and around Tehran.  And as the truth is trickling out of Iran, it appears the regime could have murdered over a thousand Iranian citizens since the protests began," Ambassador Hook told reporters.

Mrs. Maryam Rajavi, President-elect of the National Council of Resistance of Iran (NCRI), has hailed the uprising’s heroic martyrs and called on the UN Security Council, the European Union and its member states to condemn the horrendous mass killing by the Iranian regime and to take urgent action to stop this crime against humanity and secure the release all those arrested.

She called on the UN Secretary-General to send a fact-finding mission without delay to investigate this horrific crime and visit the prisons and meet the prisoners. The international community must ostracize the murderous theocracy ruling Iran from the community of nations. Supreme Leader Ali Khamenei, President Hassan Rouhani and other regime leaders must face justice, Mrs. Rajavi added.

The UN Security Council must declare Ali Khamenei, Hassan Rouhani and Ebrahim Ra’isi as criminals committing crimes against humanity for the massive slaughter of protesters in #Iran and hold them accountable. #IranProtests