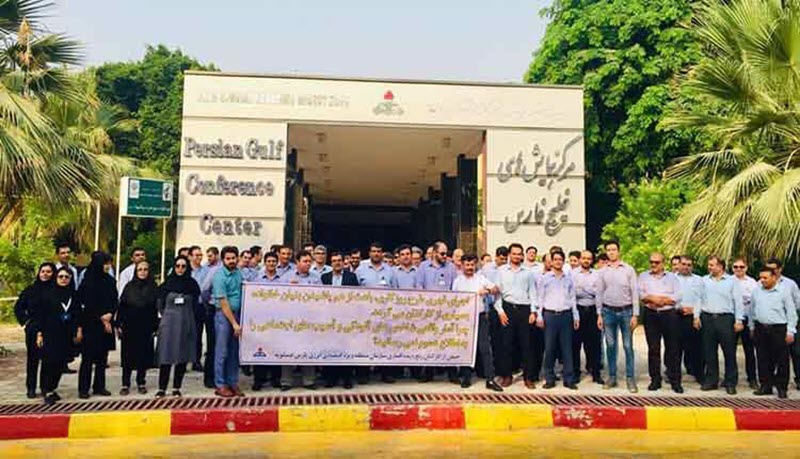 On Monday, protests were reported in various Iranian cities, including Tehran, Shiraz, Assaluyeh, Chabahr, Gachsaran and Ahvaz. The protests continue to target the corrupt and destructive policies of the regime and its lack of response to the demands of the people.

Protests by farming supervisors in Tehran

A group of farming supervisors from various provinces gathered in Tehran and held a protest rally in front of the Ministry of Agriculture. The protesters said, “We have been working for the ministry since 2004 and each of us have years of experience. But unfortunately, there’s no law to officially hire us as employees of the Ministry of Agriculture. These conditions are very hard for us.”

A group of retired workers of the Shiraz Long-distance Communications Company gathered in front of the Industries Ministry in Tehran in protest to not receiving their salaries and pension funds. In the past year, retirees across Iran have been protesting to their deteriorating living conditions, especially as the government refuses to adjust their pensions based on the inflation rate and fluctuations to the price of the rial, Iran’s national currency.

A group of employees from Saham-e Edalat company held a demonstration in front of the Majlis (parliament) and protested to the lack of job security. The protesters said they will continue their demonstrations as long as their problems remain unsolved.

Assaluyeh: Protests by employees of the Special Region Organization and Pars Energy

The workers of Special Economic Region Organization and Pars Energy in Assaluyeh held a second day of demonstrations in protest to their working conditions and the policies of the regime in this institution.

The protesters say the regime’s plans have cause their families to break apart. “Why aren’t you informing the public about the real index of pollution and social damages?” the protesters’ banners read.

Protests by the workers of Gachsaran Oil University

The workers of the Oil and Gas University of Gachsaran gathered in front of the governor’s office and protested to having been forced into one month of unpaid leave.

Chabahar: protests against the regime’s prosecutor

On Monday, the people of the regions of Komb, Domdap and Shenam in Chabahar, Sistan and Baluchistan Province, gathered in front of the regime’s court and protested against the prosecutor’s support for regime-backed individuals who are seizing their lands.

Protests by job-seekers in Khuzestan

A group of unemployed educated job-seekers protested in front of the governorate of the southern province of Khuzestan for not being recruited for more than two years by the Engineering and Oil Expansion Company.

One the protestors said, “Despite the governor’s promises, we have been waiting for two years without any answer.”

Protests by employees of Metro Holding in Tehran

On Monday, July 22, a group of employees of the “Metro Holding” in Tehran held a demonstration in front of the central office of the company in Tehranpars in protest to changes in their working conditions. The protestors chanted slogans against Mohsen Hashemi, chairman of the Tehran City Council, and demanded his resignation.

Protests by customs workers in Qazvin

According to the state-run ILNA news agency, on Sunday, more than 130 employees of the office of the road customs of Qazvin Province protested for the second time in front of the governorate over the cancelation of their working condition after installing the electronic toll devices.

According to the state-run ILNA news agency, on Sunday, July 21, a group of employees of various governmental institutions in Neyshabur, Khorasan Province, protested in front of the Office of Road and Construction of Neyshabur for not receiving their demands for more than ten years.