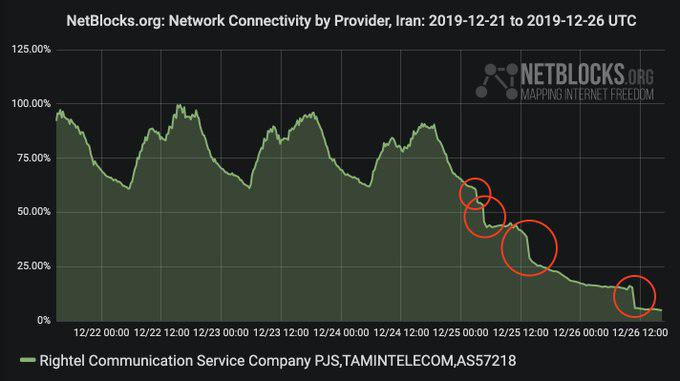 December 26 – Karaj, #Iran
“Our pain is your pain! People, join our ranks!”
“Viva Iran!”
“People did not die for us to compromise & praise the murderous leader!”#IranProtestspic.twitter.com/v4rZi0ePZN

Nevertheless, in many cities such as Karaj, Shahriar, Isfahan, Sari, Mashhad, Shiraz, Behbahan, Orumiyeh and Yazdan-Shahr, people gathered at the martyrs’ graves and pledged to uphold their ideals and continue their path. They also staged gatherings in streets or squares, chanting anti-regime slogans.

In Karaj, the regime deployed helicopters and dispatched herds of its plainclothes agents to Behesht-e Sakineh cemetery, but failed to prevent the large presence of people who had gone there to pay homage to the martyrs. The crowd was chanting, “death to the dictator,” “we did not sacrifice to compromise and praise the murderous leader.” Suppressive forces attacked the crowd on site or those approaching the cemetery and arrested a number of them.

Brave Iranians defying the regime’s crackdown & holding a ceremony for civilians killed by security forces in the Nov uprising.

Chant:
“No fear! We’re all together!”

In Shahriar, many people took part in a memorial for Nader Momeni. In Behbahan hundreds paid homage to Mahmoud and Mehrdad Dashtinia, shot to death by the security forces.

Previous article
Iran: Messages and Pictures of Resistance’s Leaders in Tehran, Other Cities on 40th Day Memorial of Martyrs
Next article
Day 43 of Iran Protests: Martyrs of the Nationwide Uprising Honored in Memorials Despite Unprecedented Security Measures