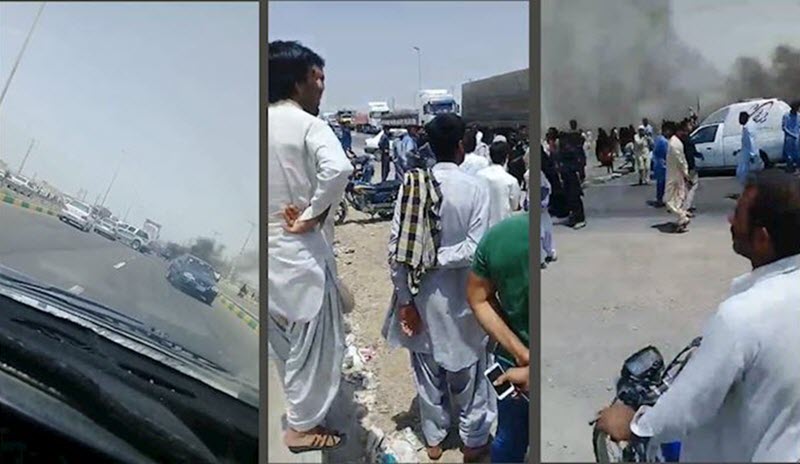 Local fishermen in the city of Chabahar, southeast Iran, held a rally on Thursday protesting Chinese troll vessels in the 12-mile area of the coast.

Iran’s regime has very close relations with China, and many Iranians believe the mullahs have literally sold off their southern waters to allow Chinese fishing vessels to plunder the Iranian nation’s wealth.

The Iranian regime’s speaker of Majlis (parliament) visited China in February and praised the growing economic ties between the two countries.

“Iran and China are two countries with historical civilization and have always had close ties with each other,” Larijani told reporters at Tehran’s Mehrabad Airport before his departure to China.

Mohammad Javad Jamali, member of the Iranian parliament, acknowledged that the speaker’s visit to China was a result of international sanctions and Tehran’s growing isolation: “Mr. Larijani’s visit happened because of the special conditions that the severe and unjust U.S. sanctions have created against the Islamic Republic and Europe is practically following these sanctions. No doubt, the Islamic Republic must use all its potential and capabilities to open other doors.”

Jamali repeated expressions that the visit “was the establishment’s decision” and that it “delivered the Islamic Republic’s message to China” was a direct hint that the visit was under direct order and supervision of the Iranian Supreme Leader Ali Khamenei.

“Earlier, the president and his first deputy visited China and Russia. But it appeared that the Chinese needed reassurances from the side of the legislative… The Chinese needed to be reassured that the talks with them are the stance of the whole [regime]… it has been made absolutely clear that the message that was delivered to Chinese officials during this visit is the message of the Islamic Republic,” Jamali added.

“There is no doubt that a ‘strategic exchange’ with China, while it has been proven that European officials’ financial mechanism package has failed, is an important and proven path in our country’s economic and foreign relations field,” Ghaffari said to the Fars news agency, which is controlled by the Islamic Revolutionary Guards Corps (IRGC).

Ahmad Shirzad, close to Rouhani’s faction and a former member of the parliament, who previously insisted on relations with the West and Europe in particular, said in an interview with Etemad online website: “Relations with China, especially economically, are very important to us and if we engage China in the right way and encourage them to have a firm stance in having a continued economic relationship with us will solve many difficulties that the Americans want to put upon our economy.”

Iranian officials’ turn to China and Russia is a clear sign that the Iranian regime is disappointed with Europe.

“We should look to the East, not the West. In addition, looking to the West and Europe has no benefits but being kept waiting, currying favor, and being belittled,” Khamenei said in a speech in October last year.

Referring to Europe’s financial mechanism and the European troika that signed the nuclear deal, Khamenei said: “I don’t trust these three countries and I say you shouldn’t trust them. If you want to sign an agreement, get real and actionable guarantees or tomorrow they’ll do in another way what the U.S. does today.”

“Sometimes, they [the European three] stick the dagger in their opponents’ breast while smiling and with nominal compliments that we know you won’t break up the agreement, they pursue their own goals,” he further said.

Despite the ballyhoo of Khamenei’s about the look-to-the-East policy and Larijani’s visit to China, the fact is that this policy is a cheap attempt by a regime that feels increasingly desperate under economic and political pressure, both from inside and outside the country.

Chinese and Russian trade with the U.S. are considerably more than their transactions with the Iranian regime, and observers believe it is unlikely that they would be willing to sacrifice it to help Tehran.

Hossein Pirmozen, a member of the Iran-China Trade Chamber, says: “The Chinese government, contrary to its political stances, hasn’t made a reasonable decision when it comes to economic exchange with Iran. The Chinese have broken their promises regarding providing Iran with necessary spare parts. They say we should do our trading via third-class banks.”

Based in part on a report on the website of the People’s Mojahedin Organization of Iran (PMOI or Mujahedin-e Khalq, MEK), Iran’s main democratic opposition group.

Previous articleIran: The Names of 11 Political Prisoners Arrested in Late April and May
Next articleBritish-Iranians Should Not Travel to Iran – UK Foreign Office