NCRI – According to a report in September 11 by “Salamat News”, a group of addiction therapist physicians gathered in front of the regime’s Ministry of Health in Tehran, to protest against distribution of “Oxicodone” drug in pharmacies by the Mullahs’ regime and also against the decision to give the medical community’s Baseej the authority to monitor addiction treatment centers. 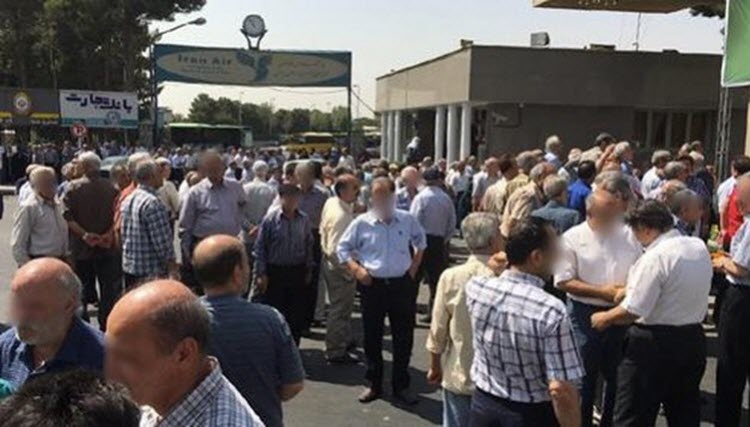 According to the same website, “Parviz Afshar” the spokesman of regime’s headquarter for combating drugs, confessed to destructive effects of this drug and also to the spread of addiction across the country. He said: “having access to the “Oxicodone” drug to this extent through pharmacies will bring about a tsunami of abusing the drug as well as addiction to it. There was a clear case similar to this one which was related to “Tramadol”. Tramadol was distributed in pharmacies as a painkiller drug. And soon we were faced with a widespread addiction to it.”

According to reports, workers of Iranian aircraft industry protested on Sunday September 11 in front of the regime’s government building in Isfahan. They protested against being laid off and the way they were transferred and relocated.

Also people in “Kheirabad Ravar” in Kerman province protested on Sunday September 11. Using stone and wood, the protesters blocked the road and prevented the vehicles from passing by. They protested against not paving the road and asked the regime’s officials to come to the place.

The protest was held after an incident on Saturday September 10 at around 11 pm, during which a young cyclist, while crossing a street in Ravar, span out, severely hit the ground and died instantly due to a head injury. People say that the young man was killed because the street was unpaved.