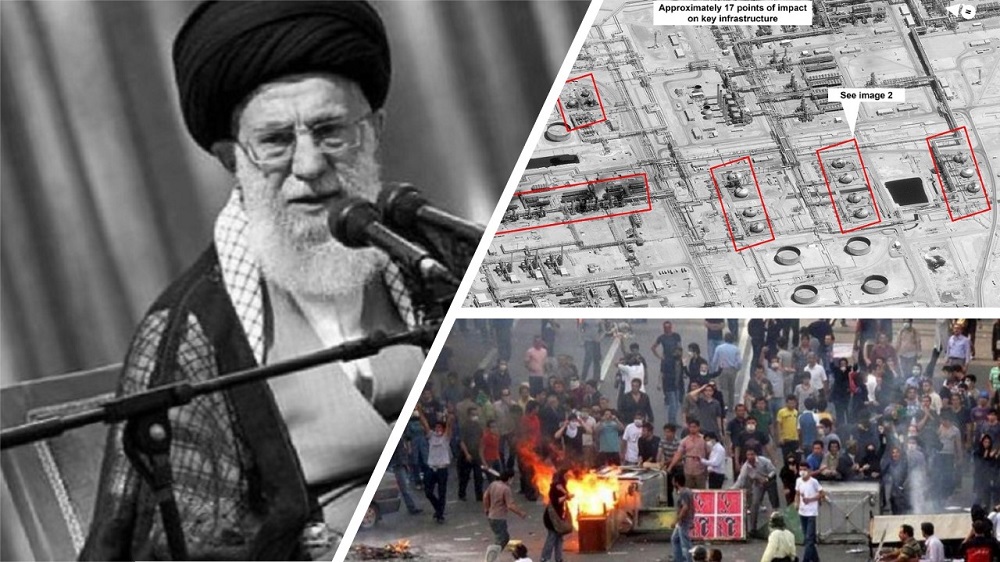 Now, after two and a half months of those terrorist operations, and after numerous investigations, Reuters news agency on October 4 refers to documents and information previously released by the Iranian Resistance. Reuters news agency quoted a source as saying: “Ali Khamenei, the leader of the Islamic Republic of Iran, approved and approved the operation … the launch site of Ahvaz airbase in southwestern Iran.”

Iran’s Resistance at the September 30 press conference saw the cause of the regime’s crisis and aggression not as a sign of power, but as a sign of genuine despair and reflection of its late stages, and contrary to many appeals, wrote:

“This regime is facing strong protests and protests in Iran that began last year and continue to do so. There is also an opposition inside and outside that is crystallized in the MEK. On the other hand, the economy has collapsed not only because of sanctions but also because of the spread of corruption. “So, basically, this regime is in despair, and in this framework, the regime is trying to maneuver and tactics to get a weapon that will save it from the strategic bottleneck it is in.”

But the height and accuracy of Iran’s resistance analysis, which has now emerged in all streets and cities of Iran, was that, rather than being subjected to a false power of regime, he predicted “deeply that the regime will soon face a crisis” (The MEK spokesman, Shahin Gobadi interview with Sky News on October 1, 2019) and once again affirmed the deep understanding of the Iranian Resistance Leadership Organization from Iran’s boiling society.

If we looked at the mullahs’ regime a few months ago, all the reasons that led it to embark on an adventure against American drones and oil tankers in the Persian Gulf and Saudi installations at Aramco are still in place. The opposition has grown stronger, and the resistance units have expanded. The deterioration of the economic situation, international sanctions, corruption, and embezzlement and class divisions have increased, and finally, the people’s discontent with corruption and murder and looting has manifested itself in a robust and powerful uprising.

Emad Afroogh, a former member of the regime’s parliament, cited growing dissatisfaction: “Today, there has been another protest in popular speech, what people say is that you have controlled the grains, but the grains have not been controlled, despite the promise you made! The problem is that so far, people have been protesting the announcement and implementation of the gasoline rate increase, and now they are protesting the aftermath.” (Farhikhtegan website, November 25, 2019) This crisis has no prospects for economic opening. And the regime’s media, not long after the high price of gasoline, wrote that “the high price of gasoline … will have inflationary effects in the future and reduce the purchasing power of households” (World Industry Newspaper, November 25, 2019)

As a result, the regime’s stalemate continues, and the same deadly duplicity that has been repeatedly pointed out by the Iranian Resistance. Either abstaining from internal repression and terrorism and exporting crisis abroad that is incompatible with the nature of religious dictatorship that underlies regime change or continuing the war with the international community and continuing to export terrorism and accept more suffocation to accelerate and overthrow the social explosion. It ends.

What is certain is that the regime is in a position to take any action, both externally and internally, exacerbating its internal and external crises and awaiting its consequences. This is a dead-end concept in which the regime is trapped.

On November 29, 2019, the state-run Aftab Yazd newspaper confesses to the fact: “Now that none of these actions, from persuasion to fielding, and officials are on the same path of petrol depletion, there is still a waiting list. Let us be more shocked. ”