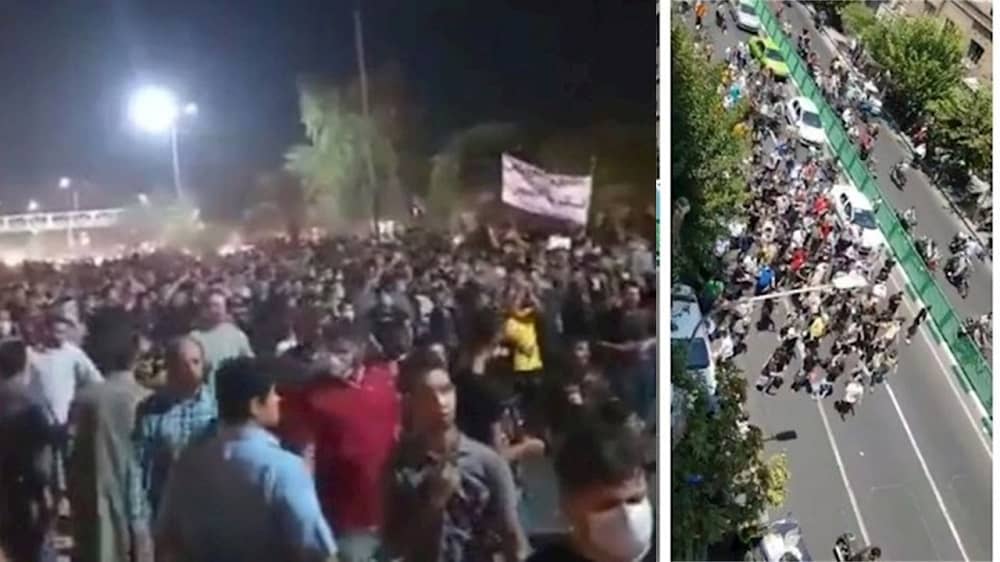 Protests erupted in Tehran on Monday, days after protests in Khuzestan began. People in Tehran chanted slogans against the regime officials and condemned the regime’s warmongering policies. They were heard chanting “neither Gaza nor Lebanon, my life only for Iran,” and “Down with the Dictator.”

July 26 – #Tehran, #Iran
Protesters chanting in the capital:
"Mullahs must get lost!"#IranProtestspic.twitter.com/YSPrdWSwr2

Protests continued in Khuzestan province on Sunday for the 11th consecutive day. As protests continue and spread to other provinces across Iran, state media acknowledge the society’s restiveness and warn about the “danger” of the ongoing protests.

“When executive mechanisms become invalid and people’s trust in the system is undermined, what is the solution that obliges the system to pursue and fulfill the people’s demands? The damage by Hassan Rouhani’s government to the [regime and the public trust in democracy is so great that in the years to come, we will have to see the consequences of this mistrust,” the state-run Vatan-e Emrooz wrote on July 24, blaming Hassan Rouhani’s government.

Vatan-e Emrooz then acknowledged that “People’s problems now are not just water shortages. Economic problems are at the top of the people’s problems and certainly have a central impact on the formation of recent protests in some cities of Khuzestan.”

Khuzestan does not only suffer from water shortages. In an article in the state-run Iran daily on July 24, Ali Rabie, Rouhani’s spokesperson, acknowledged this fact.

“The fact is that Khuzestan has a collection of historical and chronic issues and challenges. From the 1990s onwards, there have been popular protests in this province. The situation of drinking water, the situation of dust and haze, the shortage of water needed for agriculture, the feeling of discrimination and injustice along with the expansion of industries, especially oil and steel, are among the issues that have previously caused public protests,” Rabie acknowledged.

“Khuzestan is currently the second-largest country in terms of having the most marginalized population. In other words, 25% of the population of this province live on the outskirts of cities with limited facilities. There are more than 150,000 hectares of suburban area in Ahvaz. Marginal areas surround the city from the northwest to the southeast,” Rabie added.

“Why are the major protests turning into chaos in Iran? Once and for all, a serious decision must be made on this issue, or we should at least reach a consensus,” Vatan-e Emrooz asked, warning about the consequences of crises in Khuzestan.

“The most important point is that protests are institutionalized in the society,” Vatan-e Emrooz wrote. Vatan-e Emrooz then warns about the Iranian Resistance’s impact on society.

“In the last week, the Khuzestan issue has become a problem, due to the [opposition’s] maneuvers, spreading fake reports, and the abandoned social media. Since the beginning of the revolution, the [opposition] has tried to turn any form of protest into a security issue. Thus, a reasonable attitude considers protests in the current situation dangerous,” Vatan-e Emrooz wrote, calling for more repressive measures.

Yet, the rival faction acknowledges that the current crisis in Khuzestan is much deeper than to only blame it on one faction, and oppressing people is not an answer.

“People in Khuzestan are deprived of their basic civil rights and are now demanding them.  Once again, we are witnessing poor management in the country because what we are witnessing today in Khuzestan results from wrong step-by-step policies and disregard for successive signals in previous years. Street protests in the cities of this province circulate on social media and in media outlets. However, it seems that the government still lacks a convincing answer and solution to this province’s thirsty and tired people. No official has yet provided a clear answer to the people. The public sees some orders as superficial and unrealistic, rooted in the long history of officials’ unfulfilled promises. The crucial question to which Iran’s future lies is, ‘What is the approach of the whole political structure of the country to these protests?’” wrote the state-run Ebtekar daily on July 25.

“Do the officials pay attention to the fact that such protests have increased in the last four years compared to before ?! What has been the main solution to these widespread street protests? Wasn’t just taking a serious step to restrict the Internet?” Ebtekar wrote, warning officials of the consequences of oppression, such as imposing internet blackout.

In this regard Jahan-e Sanat on July 25 warned officials who “create new crises with their approach to the current crises.”

Jahan-e Sanat then underlines that people’s protests are not limited to the water crisis. “Although the main dynamics of these protests have been attributed to water scarcity and related environmental crises, if we look deeper, these protests and unrests have even deeper roots. This includes the increasing livelihood problems, the skyrocketing prices, and the growing poverty, which water shortages and environmental crises have amplified. Livelihood problems, such as skyrocketing prices, have long sounded the alarm for protests,” Jahan-e Sanat wrote.

Other state media also warned the regime officials about taking oppressive measures. “The protest of the people of Khuzestan is a civil protest due to the basic human need for water. The lack of water supply for the people and the lack of specialized management in the governments have caused oppression to these noble people over the past years. In these circumstances, officials, who should support the nation and the rights of the citizens, should not resort to violence and suppress the people who are protesting for their social and economic life,” wrote the state-run Setar-e Sobh daily on July 24.

While these reactions show the regime’s utter fear of protests, they also underline the regime’s deadlock in dealing with the amplifying protests. The regime cannot oppress people, as it would increase society’s restiveness and intensify protests. The regime cannot tolerate protests because if it does, protests would spread across Iran and turn into a major uprising. So, the regime is in a deadlock and has no way out.

Previous article
Iran Is on the Cusp of a New Era, More Uprisings Are on the Horizon
Next article
Iran: People of Tehran Stage Protest