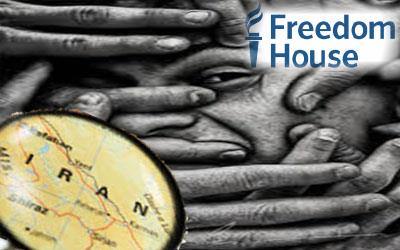 NCRI – The mullahs’ regime in Iran ranks among the world’s top ten state violators of press freedoms, the U.S.-based watchdog Freedom House has said in its latest annual report.

The situation for journalists in Iran remains uncertain in the face of “harsh censorship” and “increased arrests by security services,” Freedom House said in its report FREEDOM OF THE PRESS 2016 published on Tuesday.

“The Iranian government attempted to shape domestic media coverage of the international agreement on its nuclear program. The Supreme National Security Council instructed media outlets to praise Iran’s team of negotiators and to avoid any talk of ‘a rift’ between top officials,” the report said.

“The intelligence division of the Islamic Revolutionary Guards Corps arrested several journalists late in the year for alleged involvement in an ‘infiltration network’ serving hostile foreign countries,” it added.

Iran and Syria jointly ranked 190th out of 199 countries in the global rank for freedom of the press. They jointly ranked as the Middle East’s top press freedom violator.