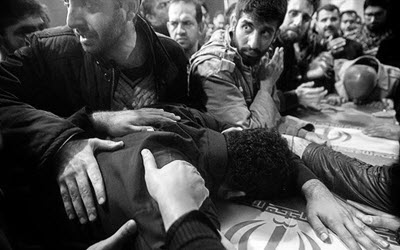 NCRI – The Iranian regime’s forces in Syria suffered heavy blows from Syrian opposition fighters over the weekend in the battles in southern Aleppo.

A number of the Iranian regime’s forces were also taken as captives by the Syrian opposition forces.

The battles were centered around the strategic town of Khan Tuman, south of Aleppo, which the Iranian regime had sought to capture as part of its plan to besiege Aleppo. Tehran’s forces were repulsed from the area.

Pictures of the Iranian regime’s casualties have been widely circulated in social media.

In a rare move, the IRGC’s branch in Mazandaran Province, northern Iran, issued a statement on Saturday, acknowledging a number of the IRGC forces killed in Aleppo were dispatched from the province.

The statement, that reflected the regime’s anxiety, asked the people of the province to keep calm and not pay attention to what they see or hear from non-governmental sources including social media.

The IRGC described the distribution of the pictures of the regime’s casualties as “psychological warfare against those who defend the sacred shrine,” Tehran’s jargon for deployment of its forces to Syria to defend the Assad regime as he massacres the people of Syria. This is while Aleppo is almost 300 kilometers away from the holy Shiite shrines near Damascus.
Meanwhile in a sign of the significance of Bashar al-Assad’s survival for the clerical regime, Ali Akbar Velayati, a senior adviser to the Iranian regime’s Supreme Leader Ali Khamenei, on Saturday in Damascus reiterated that Assad’s remaining in power is a “red line” for Tehran.

Last week, a senior negotiator for Syria’s democratic opposition spoke out against the crimes of the Syrian and Iranian regimes against the people of Aleppo.

The Syrian revolution’s forces and the Iranian Resistance stand united in the face of the dictatorships in Damascus and Tehran, George Sabra of the opposition High Negotiations Committee (HNC) told the Iranian opposition satellite television channel Simaye Azadi (INTV) on Wednesday.

Mr. Sabra expressed his appreciation to the Iranian Resistance’s President-elect Maryam Rajavi for her position on the crisis in Aleppo and for denouncing the criminal dictators Bashar al-Assad and Ali Khamenei.

“We believe that the Iranian Resistance is on our side with all sincerity, and we honor our joint measures against dictators to help the people of Syria and to end the crisis that has been created by the mullahs’ regime. In fact, the Tehran regime supports Assad’s dictatorship to pursue their goals. Therefore, our battle is a joint battle,” he said.

“I can assure you that the people of Aleppo are resilient and they will not surrender. By God’s will and help, the victory is near. Not only will this victory bring wellbeing and comfort to the people of Syria but it will also bring tranquility to the entire region. It will mean that the people will rule their countries based on their own interests and desires, and they will not be ruled by the mullahs in Tehran or the security forces of Assad in Syria or the sectarian militias in Lebanon or Yemen,” he added.